Walmart supporters will protest retaliation against workers in every single Walmart store in Massachusetts and Washington on Black Friday. It's just one sign sign that Nov. 28, 2014, will be the day of the most intense show of support for Walmart's 1.4 million workers.

It's also a sign of the rising disgust for Walmart's owners. The Walton family owns more than 42 percent of Americans combined but can't pay their employees a living wage.


Diana has worked as a cashier at Walmart for more than two years. She is one of the lucky workers scheduled for a consistent 40 hours a week. She and her coworker stood up for full-time status and won it for themselves and about 15 workers in their store.

Even with more hours than many, at just $9.40 an hour Diana often finds herself strapped for cash. And despite her 40 hours, she doesn’t have full access to benefits because she was classified as a part-time employee.

She is very disciplined on her spending so that she doesn’t fall behind on bills. After she covers the rent for the one-bedroom apartment she shares with her niece, she has little left to cover the bills or save for the car she dreams of buying to get her to work. On rough weeks, she will go full days without eating meals. Friends in her neighborhood started to take notice and bring her food from time-to-time.

“On by weeks, you just have to make it until payday on Wednesday,” Diana said.

She and her coworkers try to look out for one another and buy one another food when they can. Recently, when her coworker asked her to pay for her drink, she ran her card and crossed her fingers. She only had $18 to her name the last time she checked and she was afraid to see what, if anything, was left.

Walmart workers formed the Organization United for Respect at Walmart (OUR Walmart) to raise their wages and to form a union. They need the Teamsters help on Black Friday, and Teamsters General President Jim Hoffa wants you to support them.

All they're asking is that you take 30 minutes to visit a store near you. If you do it sometime between 7 am and 10 am you will really send Walmart a strong message. To find a Black Friday action near you, go to www.BlackFridayProtests.org. 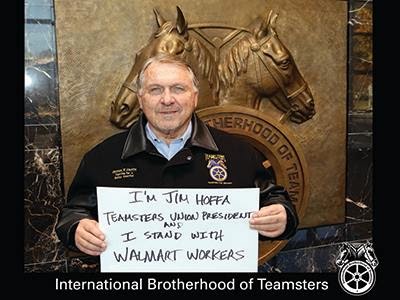 No matter how many of you there are, they’re asking you to take a picture of yourself and your group in front of the store and post it to social media, or email it to community@changewalmart.org. Make sure your sign specifies which city or town you're in and that you support #WalmartStrikers. That will show that thousands of people from across the country want Walmart to change.

OUR Walmart is also asking you to deliver your sign to the store manager. That's because every time that store manager gets a visit from a supporter, they must call Home Office in Arkansas and tell them. So it has just as much of an impact if it’s you and one other, or a dozen or 50 of you.

So just get out there, no matter how big your group! Every time a Walmart manager calls Bentonville, you are making a difference. They are hearing you tell that it’s time to end the financial crisis that the Waltons have created for American families.