Teamsters marching for jobs in NYC; 'It's our time' 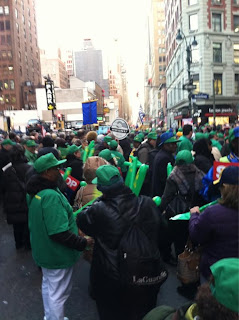 Our Teamster brothers and sisters in New York are marching for jobs and economic fairness right now. The "March for the 99%" starts at Herald Square downtown and ends at Union Square. We expect there are plenty of  "Stop the War on Workers" signs from Joint Council 16 among the thousands of signs. In fact, we can see the corner of one in this picture of the marchers assembling.

The march is sponsored by the New York Central Labor Council and Occupy Wall Street. If you've been wondering what happened to the Occupy movement after so many camps have been dismantled, well, you may not have noticed the Occupy Phoenix protest of a Benedict Arnold Koch brothers front group in Arizona yesterday, or Occupy DC at the British Embassy, or Occupy Chicago at the British consulate. As The Associated Press reports,


The overnight police raids in Philadelphia and Los Angeles that dismantled two of the nation's biggest Occupy Wall Street encampments leave just a few major "occupations" still going on around the U.S. But activists are already changing tactics and warning of a winter of discontent, with rallies and marches every week.

The camps may bloom again in the spring, organizers said, and next summer could bring huge demonstrations at the Republican and Democratic conventions, when the whole world is watching. But for now they are promoting dozens of smaller actions, such as picketing the president in New York and staging sit-ins at homes marked for foreclosure.

The March of the 99% is pretty big -- we hear tens of thousands of people are there. We learn from Twitter that CUNY students are there en masse, along with SEIU 1199, UAW, teachers, laborers. Also from Twittter:

@JoshHarkinson: My office off Broadway is surrounded by police barricades, cop cars, and helicopters for the #OWS & labor march kicking off at Herald Square

@steffikeith: #OWS union march effective because half these guys look like they would hang in same bar as the cops

@mgouldwartofski: "We are the union. The mighty, mighty union." Labor's March of the 99% has made it to Union Sq, tens of thousands strong. #OWS #WorkersPower

Here's the invitation for the March of the 99% on Occupy Wall Street's Facebook Page:


Good Morning: The wealthy elite aka the 1% ask you to stay home today. They want to stay at work late, if you have a job that is. If not, they ask that you watch television, go shopping, or spend time on the computer, alone. Do not question anything. They do not want you to join with thousands of other people who just like you, are feeling then pressure of an economy and government controlled by them. The 1% are asking, no demanding, stay inside. Do not join the growing movement. No, not today.

We say, Disobey. See you in the streets today. It is our time.