Teamsters and 200 others greeted Jackson Browne today at Occupy DC, which has been camped out at Freedom Plaza since October.  Browne came to celebrate and inspire the movement with a couple of tunes in front of the "post-consumer tree," made from the plastic the Occupiers have been using.

According to NBC, Browne told the crowd,


A life-long friend of mine is here. My goddaughter's here, and I made up my mind to come here as soon as I could to visit them, and I've seen this tree, this peace tree as they spent weeks making it here.

At the end of his short gig, Browne echoed a cry we've been raising since Wisconsin:

The singer-songwriter has helped the Occupy Movement in other ways. As Kevin Zeese tells us, Browne donated three bike generators to Freedom Plaza. Zeese reports:


Brown went to Occupy Wall Street last week and sang a couple of songs with Dawes. He sang a new sone he wrote for the Occupy Movement which asks -- which side are you on?

Browne is working on an album with other musicians to raise money for the Occupy movement.  According to ABC News, 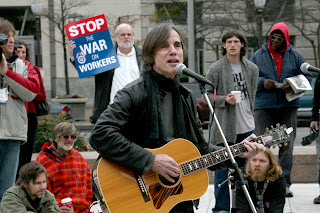 Crosby & Nash, Jackson Browne and Devo are among the many artists whose music will be featured on Occupy This Album, an upcoming collection of tunes that will benefit the Occupy Wall Street movement and related campaigns. The compilation is due out sometime this winter, and is being produced by the Music for Occupy, an organization that says it seeks "to inspire and celebrate through music the Occupy Wall Street movement and the 99% who've been adversely affected by the economic corruption that has permeated our Democracy.

"The Occupation movement is really the voice of the people, it's an idea that's been a long time coming," Graham Nash said in a statement about the anti-greed initiative. "I fully support their non-violent protests against a system that is carefully crafted in favor of the rich one percent."

Posted by Teamster Power at 4:25 PM