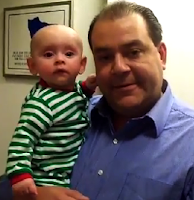 Our brothers at Sotheby's will be out of work for five months by the end of December. On Jan. 1, they'll lose their health care benefits.

It's hard to fathom the callousness of a company that spends $2.4 million on union-busters so it can keep 42 hardworking art handlers out on the street. Even harder to understand how the shareholders would approve a $3 million raise for CEO Bill Ruprecht.

The photo above shows our brother Luis Baucage and his 5-month-old son. We don't think that little guy did anything to deserve the lump of coal he's getting Jan. 1 from Sotheby's. His dad and the 41 other art handlers from Local 814 are simmply standing together against a vindictive company that's trying to cut their pay and benefits while slowly dissolving the union. Just because Bill Ruprecht thinks he can get away with it.

A torrent of signatures telling Sotheby's to end the lockout will pressure them to do the right thing. Sign the petition here to help Teamster art handlers get their jobs back at good wages and benefits.
Posted by Teamster Power at 12:34 PM