Rays of hope from behind the cheese curtain 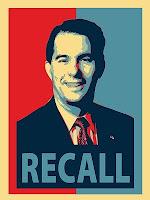 Wisconsin voters will almost certainly get a chance to vote to recall Gov. Koch whore Scott Walker. Today We Are Wisconsin announced they collected 507,533 signatures to put the recall on the ballot. They're very close to the 540,208 needed by Jan 17.


Organizers of a petition drive to force Wisconsin's Republican governor into a recall election next year said on Thursday that in just one month they had collected 94 percent of the signatures needed for the special election.

The group United Wisconsin, which opposes the collective bargaining changes Scott Walker pushed into law earlier this year, said it now hopes to gather more than 720,000 signatures to recall the first-term governor by the January 17 deadline -- nearly 200,000 more than needed.

The group said it had already collected 507,533 of the 540,208 signatures required and now hopes to gather 720,277 in all. That latter figure would represent 33 percent of the 2010 general election turnout, although petition gatherers only need 25 percent to force a special election.

It will be tough to get rid of him, though. Walker will collect tens of millions of dollars in campaign cash from front groups funded by Wall Street billionaires and corporate CEOs. He'll use that money to spread shameless lies about his "accomplishments."

There are some reasons for hope, though. A cloud is hanging over Walker's head as the federal investigation into his administration continues. A commercial real estate broker and Walker supporter was arrested on Tuesday for refusing to cooperate with investigators.

Another bright spot is the strong support rural voters are showing for recalling Walker. As John Nichols points out in Nation of Change,


The first counties to approach their goals for the entire recall drive have been rural ones -- all of which send at least some Republicans to the legislature.

Indeed, a number of counties that backed Walker in 2010 are leading the pack when it comes to producing recall signatures.

A third factor, albeit an unfortunate one, that will contribute to Walker's downfall is rising joblessness in Wisconsin. Employment is the most reliable predictor of an election's outcome. Wisconsin has lost jobs in the five consecutive months since Walker's "reforms" took effect.

Finally, Mahlon Mitchell, the charismatic president of the Professional Fire Fighters of Wisconsin (that would be a union), may just decide to take on Walker. And he could be a formidabloe opponent.
Posted by Teamster Power at 4:34 PM