What happened in Kentucky (it wasn't good) 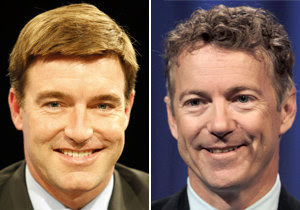 The Teamsters are pretty bummed that Kentucky Attorney General Jack Conway lost his race for Senate to Rand Paul.
Here's what Paul thinks of unions: he just named a vice president of the National Right to Work for Less Committee as his chief of staff.
Conway was one of the state attorneys general who sued FedEx for misclassifying workers. He paid a heavy price for prosecuting a nursing home chain that allegedly covered up the sexual abuse of an elderly resident. The owner of the nursing home chain, Terry Forcht, poured money into Paul's campaign for attack ads on Conway.
It will be interesting to see if Rand Paul stands up for working people and elderly victims of sexual assault when he arrives in the U.S. Senate.
Posted by Teamster Power at 1:02 PM