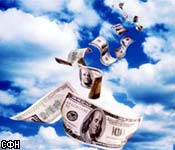 ...why don't we create jobs for Americans instead of giving tax cuts to rich people?
That was the good question blogger Cenk Uygur asked in a recent Huffington Post. He pointed out that cutting taxes for rich people is one of the worst possible ways to create jobs. Plus, he writes,


...if they are creating jobs, it isn't here. The money is flowing out of the country and into developing markets at an incredible rate.


How about instead of giving the money to the rich and hoping that they create jobs, we just create the jobs! Imagine what we could build and how much good we could do for the country if we used that extra $700 billion to actually hire people directly. Imagine how many jobs that could create. ($700 billion is what the top tier would receive from a tax cut over 10 years).