Town fights back against corporate move to Mexico 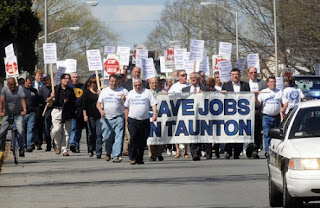 A feisty Massachusetts city wants to use the power of eminent domain to prevent a company from moving 100 union jobs to nonunion plants in Mexico and California.
(Photo by Mike Gay/Taunton Gazette)

Taunton, Mass., is an old industrial city of 54,000 with 8.7 percent unemployment. It is home to Haskon Aerospace, which makes silicone-rubber seals and gaskets for military planes and commercial planes. Haskon's parent, Esterline Technologies, made profit of $120 million last year; its CEO, Roger Cremin, took home $6,731,506, according to CEO Paywatch.

Earlier this year, Esterline said it would close the plant, which had made money and provided good jobs in Taunton for 80 years. United Electrical (UE) workers Local 204 looked into buying the plant themselves. At first, Esterline agreed to sell the equipment to the union. Reports Naked Capitalist:


Here’s where it gets ugly. Esterline had given the union, the United Electrical, Radio and Machine Workers union, the right of first refusal to buy the facility and operate it itself. But the company decided to renege on the deal when the union had to insist that the company obey Massachusetts law and pay for three months of medical care after employees were let go. Esterline started dealing in bad faith, and said it would cut the already-agreed-upon severance package by $143,000. That’s not kosher; it’s called “regressive bargaining” and the unions have filed charges with the National Labor Relations Board.

The Taunton Gazette reports that Haskon workers' last day on the job came Tuesday, Oct. 26, despite the company having previously told them they had until that Saturday to clear out their lockers. The union is still trying to buy the equipment (the company doesn't own the building).
But Esterline says it needs to be compensated for the $143,000 in severance costs (2 percent of the CEO's  take-home pay). It scheduled an auction for its equipment. Then Taunton struck back. Last week, the city council made a preliminary commitment to take the factory under its powers of eminent domain, which allow governments to take control of private property for the public good.

More developments are expected this week. Stay tuned.
Posted by Teamster Power at 11:25 AM