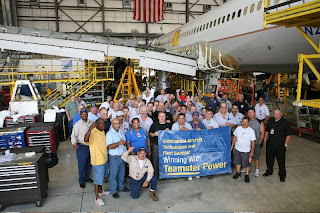 This just in: The Teamsters and United Continental Holdings (the new parent of Continental and United airlines) reached agreement on a first contract that includes job security language and four pay hikes over the next 2-1/2 years for Continental fleet service workers. The contract, if ratified, will cover 7,600 new Teamsters who perform essential work at airports, including handling baggage, moving cargo and directing jets to the terminal gates.

General President Hoffa called it a solid agreement that sets the union up well for the merger process. Gary Welch, a 14-year fleet service worker based in Houston, served on the Teamsters Negotiating Committee. He said achieving a good first contract after five months is "impressive and unusual."

According to the IBT, the 30-month contract is retroactive to July 1, 2010. It includes 10.5 percent in guaranteed raises compounded over the life of the contract, strong job-security language, profit sharing, shift-dirrectial pay, longevity premium increases ang better displacement and grievance procedures.
Posted by Teamster Power at 2:15 PM