Some didn't do it voluntarily, according to credit reporting agency TransUnion. The banks shut down Visa, Mastercard, American Express or Discover cards because people fell behind in their payments. Others stopped using credit cards because cardholders aren't buying as much or are paying down their balances.

Either way, consumers are stressed, said Ezra Becker, vice president of research and consulting in TransUnion's financial services business unit. Becker told the Associated Prss that carrying a credit card balance before the recession was more of a lifestyle decision reflecting spending choices.


Now it's out of necessity. In times of financial distress, nobody wants to carry a balance. Where people can afford to pay things down, they do.

Here's one reason people are feeling poorer (in addition to high unemployment and declining wages): housing prices are still falling.  The Census Bureau reported that prices for new homes fell a whopping 13.9 percent from September to October. 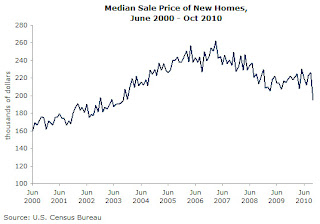