UNFI, America’s largest organic and natural foods wholesaler, claims to be a values-driven corporation. Teamsters know otherwise. They came to a natural foods conference in Anaheim, Calif., to tell attendees about how UNFI bullies its workers.

Here's the story they told at the National Products Expo West: UNFI intimidated, fired and threatened immigrant workers trying to organize a union in Moreno Valley, Calif., breaking federal laws that protect workers' rights.  The corporation even made death threats against workers, according to a 2012 report by the International Labor Rights Forum (ILRF). UNFI violated workers' rights in Auburn, Wash., when it threatened to replace them permanently, according to the ILRF.

Presently, UNFI still refuses to recognize the union formed by UNFI drivers in Moreno Valley. The Teamsters Union was federally certified last November as the drivers’ union after UNFI managed to delay the counting of the ballots for over a year.

In Anaheim, protesters also targeted Whole Foods because UNFI is its dominant supplier. “If values matter, like Whole Foods advertises, then it should live by them,” said Randy Korgan, Organizing Director for Teamsters Local 63 in Covina, Calif. Korgan explained,


Whenever a group of workers at a UNFI warehouse or truck yard attempts to form a union, UNFI management brutalizes them with a barrage of tactics based on contempt and fear, solely for the purpose of intimidating their own workers.

Sergio Acosta is a warehouse worker who was fired by UNFI when he tried to organize a union with his co-workers. He came to Expo West and talked to hundreds of people. Said Acosta:


Many people are showing their support here at Expo West. They agree that if Whole Foods and UNFI want to start living their professed values, UNFI needs to stop firing workers like me, stop the death threats against immigrant workers like they did in Moreno Valley and start recognizing the workers’ union.


We came to Natural Products Expo West to inform the businesses and organizations in this industry about UNFI’s unconscionable behavior. What’s amazing is how many buyers, restaurant owners and organic producers told us they also feel bullied by UNFI and Whole Foods’ abuse of dominant market power.

Small retailers and producers were unwilling to share their stories publicly for fear of retaliation from UNFI and Whole Foods.


Over the years UNFI has tried to undermine workers who have asserted their rights protected by United States law, even where the Teamsters have been certified as the workers’ union through federally supervised elections. UNFI wants to destroy its workers’ fundamental rights to join together to improve their working conditions. 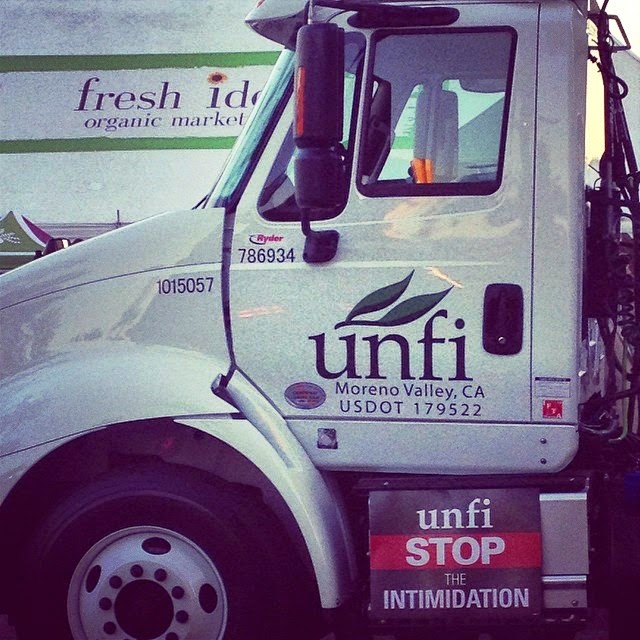 Posted by Teamster Power at 4:19 PM