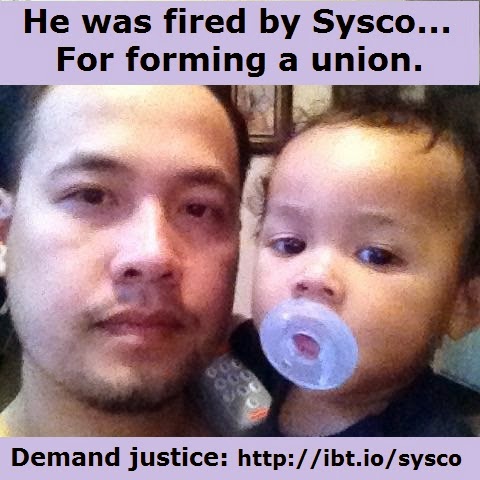 You can help. Go to http://ibt.io/sysco to join in the fight for justice.

Bruce Her, pictured above, was one of the 15 who lost his job in Atlanta during the campaign to join Teamsters Local 528. Three more Sysco workers were terminated in Kansas for the same reason.

The Protecting Sysco & US Foods Workers Facebook page tells us that isn't all Sysco did:


Teamsters Local 528 has filed numerous charges against the company for direct dealing with employees, making unilateral changes to things such as work rules, discipline standards and scheduling, conducting surveillance and threatening employees.

Sysco’s anti-union antagonism is continuing as workers in the two facilities try to bargain first contracts after winning their Teamster representation elections.

Nearly 8,000 Teamsters helped build Sysco into the leading high-volume foodservice provider in the United States. They have pledged to pursue relentlessly justice for the workers targeted for their union activity.

You can help by calling on Delaney to immediately reinstate the terminated workers and to bargain in good faith for fair contracts. Go to this link http://ibt.io/sysco to send an email to Delaney demanding justice and an end to union busting.
Posted by Teamster Power at 2:09 PM