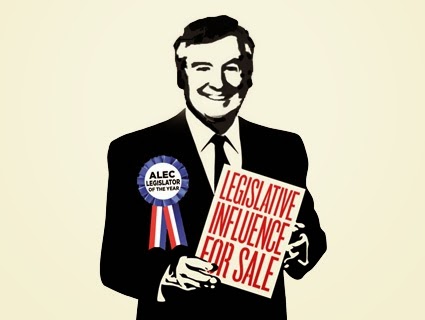 Just when ALEC was starting to succeed in killing states' renewable energy standards, one of its biggest fossil-fuels members decided to stop paying membership dues. On Monday, oil-and-gas giant BP announced it was parting company with ALEC.

ALEC, if you haven't been paying attention, is a corporate escort service that finds willing politicians to, ahem, 'influence' on behalf of polluters, union-busters, privatizers, monopolists and purveyors of dangerous products. For companies that pretend to care about the environment, workers or consumers, exposure as an ALEC member can be pretty embarrassing.

A campaign to expose ALEC's members, of which the Teamsters has long been part, helped force more than 100 organizations to quit. The total market capitalization of the companies that left ALEC in recent years is more than $7.25 trillion.

One company isn't likely to leave ALEC any time soon: Koch Industries, the company the Koch brothers inherited from their father. The Kochs have bankrolled ALEC over the years to weaken unions, lower wages and discourage clean energy. Their motives are purely mercenary and not 'conservative.' Koch Industries, which employs unionized workers and refines and distributes non-renewable energy sources, wants to lower costs and expand its markets.


Prevailing wage repeal, according to Marquette University Law Professor Paul Secunda, "is just another way in the building industry to get cheap labor."...

The worst thing ALEC did this year was to ram a right-to-work bill through Wisconsin's Legislature. ALEC didn't just provide goodies (like free vacations and access to campaign cash) to GOP lawmakers who fought for it. ALEC actually wrote the right-to-work bill and paid for lobbyists to testify for it.

As one a sign held by one Wisconsin protester read,


Unless your name is ALEC, you no longer have a voice in this state.

Posted by Teamster Power at 4:15 PM