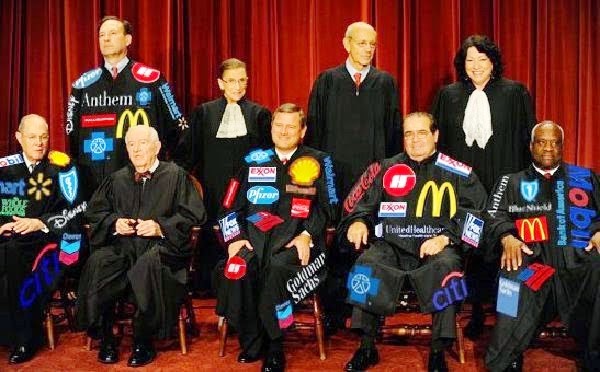 It shouldn't be a surprise that corporate lobbyists last year helped defeat a constitutional amendment to overturn the U.S. Supreme Court's Citizens United decision. The court ruled corporations are people and can spend as much as they want on influencing elections.

Common Cause recently analyzed who lobbied against the amendment. The list includes the usual suspects: The U.S. Chamber of Commerce, the Koch brothers, the National Association of Manufacturers.

What's alarming about the list is that these groups represent the interests of businesses outside the United States. In other words, the corporations that the Supreme Court ruled are people aren't really American people.

The U.S. Chamber of Commerce (which has some nerve putting 'U.S.' in its name) has on its board of directors representatives from
Many more of the Chamber's directors represent multinationals, like Xerox and IBM. Many are Wall Street firms that invest globally.

And who can forget the Koch brothers' disloyalty to the United States when they sold oil equipment to Iran, flouting a ban on trade with that sponsor of terrorism.

The National Association of Manufacturers would more properly be called the International Association of Manufacturers. Its board of directors is filled with representatives of multinational corporations like Exxon Mobil Corp., General Electric Co., BP America; our old friends Pfizer, Deloitte and Sanofi from the Chamber; and a slew of companies that offshore jobs like Whirlpool, Westinghouse, Ford and General Motors.

What could possibly go wrong?

As WNYC pointed out,


The worry is that domestic subsidiaries would put their foreign parent company's political and economic interests ahead of their country's. (Note: Ya think?) Even with the prescribed separation of the U.S. subsidiary’s political activities from the foreign parent, it’s easy to imagine a situation in which those rules are bent or broken. It’s even easier to imagine this happening in a post-Citizens United world. In his 2010 State of the Union address, President Obama said that the Supreme Court had “reversed a century of law that…will open the floodgates for special interests—including foreign corporations—to spend without limit in our elections.”

Posted by Teamster Power at 4:07 PM