The view from Wisconsin 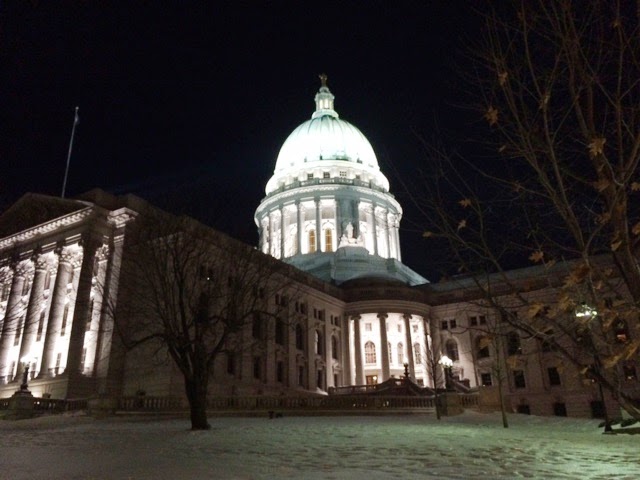 Brother Rob Moss, Business Agent for Teamsters Local 695 in LaCrosse, has been fighting with everything he has against the right-to-work bill that job-killer Gov. Scott Walker says he'll sign on Monday. Brother Rob sent us the photo above, along with this message that he agreed to let us share:


I wanted to share this picture I took this morning about 1 a.m. I had to move the Joint Council 39 semi to different parking spots for the protest at 12 p.m on Thursday the 5th. As I was walking around the square I came across this sight of the Capitol building with no one else around.

As I stood there in the dark alone, I had thoughts about my Father (Bill Moss) who was a Teamster for 37 years. A WWII Normandy invasion trooper who served this great country and then raised a family of five kids on Teamster wages. He was not a high school graduate, as he had to start in the workforce early back when many large families had to in order to survive. His American Dream was provided like many others by belonging (under Hoffa Sr.) to our great Union. My family had six Teamsters from both sides and three generations of middle-class life.

I wondered what he would think about this great building that now still stands great but is seized by the equivalent of modern day pirates with political agendas targeting unions. I've always wished for my Dad to live longer then his 67 years, however I'm glad he did not have to witness what is going on in our great state today. Sadly, if this nutcase governor does not get derailed at the national level the rest of the country will suffer along with us. I won't say his name as he not deserving!

I'm hopeful that the big money falls short of buying this country completely. Right now I could only hope to return some future night and witness this sight in better times!

And if you're wondering where those pirates are coming from, Shepherd Express has the answer:


...the “vast right-wing network” that supports Walker and his allied legislators—pro-business interests such as the Wisconsin Manufacturers and Commerce (WMC), the governor’s billionaire benefactors, the uber-conservative Bradley Foundation and, last but not least, the American Legislative Exchange Council (ALEC), the pro-corporate “bill-mill” outfit that churns out anti-worker, anti-consumer and anti-environment model legislation.

Posted by Teamster Power at 5:18 PM