Teamsters carry on the fight against Mexican trucks, file lawsuit 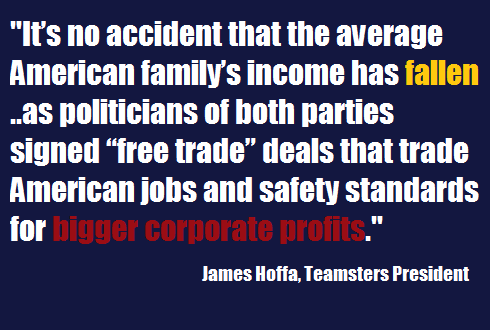 The Teamsters are taking their battle to keep dangerous Mexican trucks off U.S. highways into a third decade with a lawsuit filed earlier this week.

The suit, filed March 10 before the Ninth Circuit Court of Appeals, says the Federal Motor Carrier Safety Administration's action to open the border was “arbitrary and capricious” and not what Congress intended.

The reason FMCSA's decision was "arbitrary and capricious"? Congress ordered the agency to conduct a pilot program with Mexican trucks to determine if they were safe enough to use U.S. highways. Only about a dozen Mexican carriers participated in the pilot program, not enough to draw a sound conclusion about the likely safety of Mexican trucks.

The Department of Transportation's (DOT) Inspector General agreed the pilot program involved too few Mexican trucks to determine their future safety performance. And the IG pointed out DOT couldn’t inspect enough carriers in Mexico because of the danger to transportation inspectors. The Teamsters have long argued that letting Mexican trucks travel in the United States was unfair because Mexico is too dangerous for Americans drivers.

FMCSA went ahead anyway and announced it would open the border to Mexican trucks later this year. Teamsters General President Jim Hoffa said then,

The lawsuit seeks to reverse the FMCSA's decision. The Teamsters were joined in the suit by Advocates for Highway and Auto Safety and the Truck Safety Coalition.

Inside FMCSA notes the agency may face further challenges:


In addition to the Teamster’s recent legal challenge, efforts to reverse FMCSA’s decision may emanate from Congress. Congress has stepped in before to prevent the agency from opening the door to Mexican truckers and could do so again.

Rep. Peter DeFazio (D-OR), ranking minority member on the House Transportation and Infrastructure Committee, has made no secret of his opposition to FMCSA’s decision and has suggested it may be subject to congressional review.

Posted by Teamster Power at 3:31 PM