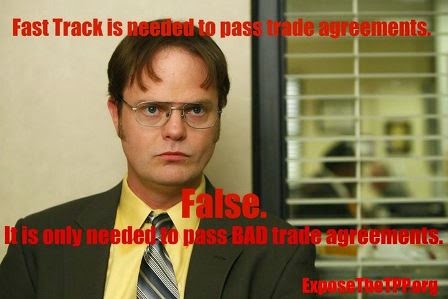 The disastrous results of the trade deal with South Korea are undermining arguments for fast track and the Trans-Pacific Partnership (TPP), Lori Wallach, Director of Public Citizen's Global Trade Watch, said today in a news conference.

The trade agreement with South Korea, which is the template for the TPP, celebrated its third anniversary on Sunday. In those three years, imports from Korea surged, exports fell and the trade deficit soared 84 percent, Wallach said.

And according to the Obama administration's own formula, the trade deficit with South Korea cost 84,000 good U.S. jobs, she said.

Incredibly, the same arguments used to push the South Korea deal are being used to promote the TPP.

The U.S. Trade Representative frequently refers to the large percentage gain in the number of vehicles the U.S. is exporting to South Korea. But before the trade deal, the U.S. sold only 15,000 vehicles in South Korea. Since then, we've sold 23,000 more. That pales in comparison to the 450,000 more vehicles imported to the United States from South Korea since the pact took effect.

John Hansen, President of the Nebraska Farmers Union, also said the South Korea trade deal offers a warning about the TPP. Hansen said the United States gave away access to its domestic market to South Korea without getting much in return. Agricultural exports to that country have increased zero percent, he said.

"We're doing worse with countries we have trade agreements with than with those we don't," Hansen said.

David Clark, a steelworker at the United States Steel Corp. Fairfield Works in Fairfield, Ala., said South Korea unfairly subsidizes its steel industry for export. Steelworkers are facing idling and layoffs in the Alabama, Texas and Ohio industries. "This surge in steel is destroying good-paying jobs," he said. "And it's eliminating a critical industry.

John Barto is a casualty of the South Korea trade deal, along with 400 others. He was formerly Vice President and General Manager of the Ansonia Copper and Brass factory in Connecticut. The company made tubes for amphibious military vehicles.

The trade deal allowed the U.S. Department of Defense to buy materials from South Korea. Ansonia Copper and Brass shut down in 2013 after a long struggle to survive trade deals since NAFTA.

"We were buried by South Korea," Barto said. Now, factories in Mexico and South Korea are making the parts for the U.S. military that Ansonia Copper and Brass used to make.
Posted by Teamster Power at 1:15 PM