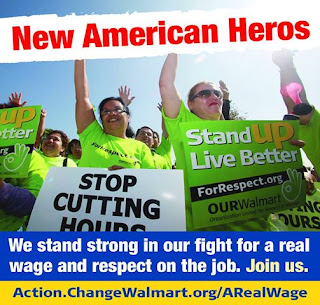 Tomorrow is shaping up to be another big day of action among low-wage workers as Walmart employees prepare to mount widespread protests and walkouts. OUR Walmart organizers are hoping the day of action will be the biggest since last year's Black Friday strike.

Josh Eidelson at The Nation reports:


This week’s rallies follow an August 22 civil disobedience action at which the campaign announced a Labor Day deadline for Walmart to raise its wages to at least $25,000 per year, and reverse the terminations of twenty workers who participated in a June strike.

Thursday’s actions will include a march through downtown Los Angeles to the site of a proposed Walmart in Chinatown, and a demonstration in Washington, DC, where all sides are awaiting word on whether Mayor Vince Gray will veto a bill (passed by City Council in July but formally sent to his desk last Friday) that would require “large retailers” like Walmart to pay employees at least $12.50 in total hourly compensation. Thursday actions are also planned for cities in the East, West, South and Midwest: Baton Rouge, Boston, Chicago, Cincinnati, Dallas, Denver, Miami, Minneapolis, New York, Orlando, Sacramento, San Francisco and Seattle.

Walmart protests tomorrow follow strikes last week involving low-wage workers in the port trucking and fast-food industries. Walmart workers are fighting back against management retaliation against OUR Walmart supporters, and they are part of a growing movement to raise wages and standards for America's growing population that is trying to survive on poverty wages.


Thursday’s rallies will have the largest total turnout by Walmart employees, and the biggest overall number of participants, of any Walmart mobilization since the one-day November 23 strike last year, in which organizers say 400-some workers walked off the job and thousands of supporters turned out to support them. Since then, organizers say hundreds of workers took part in collective confrontations with local management over scheduling on April 24, and over a hundred participated in the longer June work stoppage, which included a week of protests in and around Walmart’s Arkansas hometown.

The OUR Walmart campaign has asked the National Labor Relations Board, whose pace and penalties labor has long charged are insufficient for protecting workers, to seek an injunction to more quickly address Walmart’s recent alleged retaliation.

Last week, port truck drivers staged a historic one-day strike in their drive to become Teamsters and raise standards at the Port of Los Angeles.

While corporations in retail and other low-paying industries are rolling in record profits, low-wage workers represent the fastest-growing segment of American workers and the country's expanding income gap.

Making Change at Walmart wrote in a statement yesterday:


Economists, labor market experts and others have been increasingly voicing concern about the growing income inequality and its impact on the economy. Walmart, the largest company on the Fortune 500 list, made $16 billion in profit last year, and the majority of owners of the company, the Waltons, have the combined wealth of nearly half of American families. Meanwhile, many Walmart workers continue to earn on average poverty wages of $8.81 an hour.

Rather than providing good jobs that American workers need and deserve, Walmart is trying to silence workers who are standing up with their co-workers to live better and spending its time and money trying to deny workers a decent day’s pay.

Since June, Walmart has illegally disciplined nearly 80 workers, including firing 20 worker-leaders. More than 100 Unfair Labor Practice charges have been filed with the National Labor Relations Board (NLRB) against Walmart.

Not only do Walmart and other low-wage workers represent a growing part of the labor force, they represent a huge upsurge of collective action against corporate greed and the fight to save the middle class.

Teamsters and supporters everywhere are encouraged to stand in solidarity with Walmart workers tomorrow. Visit the Corporate Action Network website to find a protest in your area.