Trade agreements like the Trans-Pacific Partnership (TPP) have one thing in common – American workers get screwed. Jim Hoffa says it best, “Corporations got NAFTA and CAFTA and workers got the Shafta.” If you don’t think the TPP holds the same fate, a new Center for Economic and Policy Research (CERP) report confirms that average Americans stand to gain little from the deal. 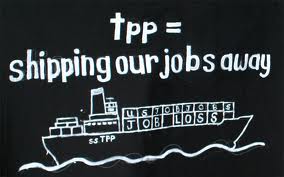 Economist David Rosnick writes median wage earners would actually see a drop in salary due to implementation of the TPP once its effect on wage inequality is considered. Overall, the U.S. would only receive a 0.13 percent boost in gross domestic product (GDP) by 2025.
Longer term, the negatives are even greater. The document finds that wage losses from a failure to restore full employment in the U.S. by 2025 due to the TPP are 25 times more than the potential gains from the trade agreement.  Mark Weisbrot, CEPR’s co-director, says:

Most U.S. workers are likely to lose out from the TPP. This may come as no surprise after 20 years of NAFTA and an even-longer period of trade policy designed to put lower- and middle-class workers in direct competition with low-paid workers in the developing world, but it’s still important to examine the economic projections.

One doesn’t have to go back to NAFTA to see the negative effects of so-called “free” trade deals. A July report by the Economic Policy Institute showed U.S. exports to South Korea fell by $3.5 billion during the first year of that trade agreement, resulting in the loss of 40,000 American jobs.


It doesn’t take a mathematician to figure it out -- these trade pacts suck for U.S. workers. While corporations tout economic gains, the only ones profiting are big business. It’s time to stop shipping American jobs overseas and dumping wages and benefits overboard with them.
When the U.S. negotiates a trade agreement, every provision should benefit working families, not big corporations. And the TPP doesn't pass the smell test.
Posted by Teamster Power at 4:15 PM