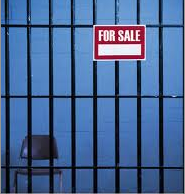 It would be a good thing if crime levels dropped to historic lows, right? Well, not if your business model relies on high incarceration rates. A new report from In The Public Interest (ITPI) explains how prison industry giants like Corrections Corporation of America are making big profits by locking states into contractual occupancy quotas and “low-crime taxes”:

65 percent of the private prison contracts ITPI received and analyzed included occupancy guarantees in the form of quotas or required payments for empty prison cells (a “low-crime tax”). These quotas and low-crime taxes put taxpayers on the hook for guaranteeing profits for private prison corporations.

Arizona, Louisiana, Oklahoma and Virginia are locked in contracts with the highest occupancy guarantee requirements, with all quotas requiring between 95% and 100% occupancy. Though crime has dropped by a third in the past decade, an occupancy requirement covering three for-profit prisons has forced taxpayers in Colorado to pay an additional $2 million.

When the big house is big business, low crime hurts the bottom line, so private prison corporations have cooked up all kinds of schemes to keep their jails full. The ITPI report, titled “Criminal: How Lockup Quotas and 'Low-Crime Taxes' Guarantee Profits for Private Prison Corporations,” says three private prisons in Arizona are administered by contracts that require 100 percent capacity. That's right – the state is obligated by the corporation to keep these prisons full or pay a fee for unused beds.

Hmm, do you think this kind of system would encourage or discourage criminalization? Well, it doesn’t matter – as long as corporate profits are high.

That’s why CCA pitched the idea to dozens of states last year:

In 2012, Corrections Corporation of America (CCA), the largest for-profit private prison company in the country, sent a letter to 48 state governors offering to buy their public prisons. CCA offered to buy and operate a state’s prison in exchange for a 20-year contract, which would include a 90 percent occupancy rate guarantee for the entire term. Essentially, the state would have to guarantee that its prison would be 90 percent filled for the next 20 years (a quota), or pay the company for unused prison beds if the number of inmates dipped below 90 percent capacity at any point during the contract term (a “low-crime tax” that essentially penalizes taxpayers when prison incarceration rates fall).

When policymakers received the 2012 CCA letter, some worried the terms of CCA’s offer would encourage criminal justice officials to seek harsher sentences to maintain the occupancy rates required by a contract inserting occupancy guarantee provisions into prison privatization contracts.

Ya think! And even as they work to force states to keep their prisons full, private prison companies push for more draconian sentencing laws. Andy Kroll writes in Mother Jones:


Private prison companies have supported and helped write "three-strike" and "truth-in-sentencing" laws that drive up prison populations. Their livelihoods depend on towns, cities, and states sending more people to prison and keeping them there.

Occupancy quotas protect the private companies from changes in the prison population and fluctuations in the crime rate. Meanwhile, they put taxpayers on the hook for reduced incarceration rates – all in the name of sustaining an industry that thrives on throwing people behind bars.

It's really shortsighted public policy to do anything that ties the hands of the state. If there are these incentives to keep the private prisons full, then it is reducing the likelihood that states will adopt strategies to reduce prison costs by keeping more people out. When the beds are there, you don't want to leave them empty.

We’ve reported a lot on the horrible safety record and criminal mismanagement of privately-run prisons. These contracts show once again why privatized prisons are such a bad idea.
Unlike state-run prisons, which are actually accountable to taxpayers and not driven by profit, private prison companies are the worst offenders when it comes to poor safety standards, including low staffing and other violations. They’re not in the business of keeping communities safe. They’re in the business of big business – by locking up more and more people and doing it on the cheap.

And that’s why private prison corporations like to claim that privatization saves money. But occupancy guarantees prove they do just the opposite. When the prison companies cut corners, the savings go to private profits, not taxpayers who pay more for prisons that are less safe.
Posted by Teamster Power at 12:47 PM