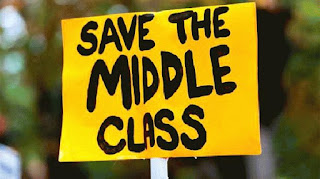 Employment might be up slightly, but salaries aren’t. Despite more people going back to work, American families are continuing to struggle and, according to a new U.S. Census Bureau report, are now making less than they did in 1989 when adjusted for inflation.


As Neil Irwin of The Washington Post pointed out, 24 years ago the median U.S. household made $51,681 in current dollars, compared to $51,017 in 2012. So despite employment gains, the situation remains dire. And the drop in salary can’t just be blamed on the last recession, he said:

This isn’t a lost decade for economic gains for Americans. It is a lost generation.

Why has that happened? Well one would have to be blind not to see that a drop in union membership has had a major impact. In 1983, 20.1 percent of workers belonged to union. That number fell to 11.3 percent last year. Union jobs bring higher salaries. It’s not hard to understand.

Of course, the desire to pay lower wages is why groups such as the American Legislative Exchange Council (ALEC) and their corporate buddies have pushed for the implementation of no-rights-at-work laws in many states across the country. They know a good deal (for them) when they see it. So they wine-and-dine state lawmakers and spend millions to pass laws that hinder worker’s organizing efforts.


Another big reason is the enactment of the North American Free Trade Agreement and other so-called “free” trade deals. While American workers were promised more jobs and improved wages, they didn’t get either. All the benefits went to big business.
The result is while corporate profits continue to soar, nothing is trickling down to average workers. Three years into an economic recovery, they haven’t recovered a thing.  Former Obama administration economist Jared Bernstein said:

Yes, the economy has expanded over these past few years, but to use a seasonal analogy, today’s report is yet another piece of evidence that this growth has once again done an end run around middle and lower income households on the way to the top of the scale.

So where do workers go from here? Just follow what thousands of them have been doing in recent months at America’s ports, fast food chains and big-box retailers. They are saying enough is enough and walking off the job. They are taking a stand for fair wages, better working conditions and the right to organize.


That’s the path for a good job and more money in their pocket.
Posted by Teamster Power at 2:51 PM