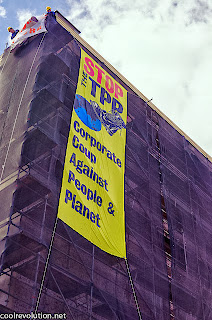 The noontime protest on Monday against the TPP (the giant Trans-Pacific Partnership job-killing trade deal) could rank among the best ever, none other than the Washington Post reported:

Eight “construction workers” in blue coveralls and odd “Stop the TPP” yellow hard hats somehow made their way up an unsecured scaffolding — the building is undergoing some exterior work — to the top, where they unfurled a 10-by-30-foot banner condemning the proposed treaty as a corporate giveaway.

Then five of the eight “workers” moved onto a lower balcony — we seem to recall it’s on the same floor as U.S. Trade Rep Mike Froman’s office — and hung two more banners.

The police finally showed up and briefly handcuffed one protester. But that was all.
The action had been planned for a month, said Kevin Zeese , an organizer with PopularResistance.org, and the coveralls and hard hats were ordered online. The door to the scaffolding was always open, he noted, and the group did a final scouting mission the Friday before the event.

But when the protesters arrived Monday in their “Stop the TPP” hats, he said, “we were shocked that there were no workers, no security. It was amazing.”

Did we mention that the building is just across the street from the White House complex, specifically the Eisenhower Executive Office Building?

Teamsters had joined an anti-TPP protest the previous Friday that included 100 people from diverse backgrounds: doctors, environmentalists, students and workers from other unions. The Teamsters ally Public Citizen explained the recent spate of TPP protests had to do with the secret negotiations going on in Washington:


The TPP negotiators were not in Washington, D.C. for a formal round of negotiations, but for a below-the-radar “intersessional” meeting. Such secretive meetings are now being scheduled at a moment’s notice in countries across the Pacific Rim as the U.S. cracks the whip in desperate attempt to get negotiations all wrapped up and tied with a neat bow by the end of the year, despite the yawning controversies and gaps in agreed-upon text.

These “intersessionals” drive the backdoor TPP talks even further underground and away from public scrutiny. Unlike the formal rounds, USTR is not even revealing the location, timing or agenda of the intersessionals. And there are no “stakeholder sessions" to which concerned groups and the general public are invited.

Posted by Teamster Power at 9:05 AM