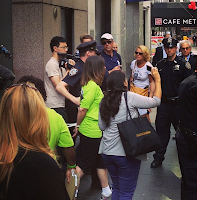 UPDATES with four new grafs 1-5 with news of arrests.

At least a dozen Walmart strikers and supporters were arrested today for acts of civil disobedience. They were protesting Walmart management for retaliating against workers and for paying them poverty wages.

Police have began to arrest about 20 Walmart strikers and supporters after 700 people rallied outside of the company's Los Angeles headquarters, demanding Walmart pay workers enough to support their families.
In front of a Walmart store near Seattle, at least a half-dozen people were arrested by police in SWAT gear. Our brother and sister Teamsters came to show their support.

In New York City, three protesters were arrested for trying to meet with a Walmart board member.

Protests and acts of civil disobedience by Walmart workers are spreading across the country into this evening. Strikers and supporters are demanding that Walmart pay its workers at least $25,000 a year and reinstate 20 workers who were fired for standing up for their rights.

Activists arrested last month while protesting Walmart's retaliation against workers set a Labor Day deadline for the company to meet the demands. They promised intensified action if Walmart didn't follow through.

Today the workers are making good on that promise in what they say is the biggest day of action since last year's Black Friday strikes.

Our brothers and sisters at Teamsters Local 391 in North Carolina are holding a forum at their hall in Raleigh, and an action -- we don't know what yet -- will take place at a Walmart store nearby.

ALIGN NY reports that three Walmart protesters were led away by New York City police officers for trying to meet with a Walmart board member.


The protesters planned to deliver a petition to company board member Christopher Williams at the time of their arrests, Making Change At Walmart spokesperson Evan Yeats said...
﻿﻿﻿
Barbara Gertz, a current Walmart employee in Denver, Colorado, was among those arrested, Yeats said. Lucas Handy, a former Walmart associate from Iowa who was fired for speaking out against the company, and Susan Gulick, a former Walmart associate from South Carolina, were also arrested, according to Yeats.

The photo below shows protesters getting ready for the demonstration outside of a Renton, Wash., Walmart (near Seattle).

Actions reported so far this afternoon have popped up in several cities, including New York, Boston, Raleigh, N.C., Los Angeles and Seattle.


In late May and early June, roughly 100 Walmart employees affiliated with OUR Walmart engaged in what they said was an unfair labor practice (ULP) strike against the company. Strikers are protected from termination by the National Labor Relations Act

Dominic Ware, an OUR Walmart member and former Walmart employee based in the Bay Area, said he was fired in early July and that management told him specifically it was because of his participation in the May-June strike.

In addition to the 20 workers which OUR Walmart claims have been wrongfully fired, they say another 50 or so have been disciplined for organizing.

Today's protests represent another step forward in the movement to empower and raise standards for low-wage workers like those at Walmart. Hundreds of workers are turning up the heat on today and showing that they will not be bullied by the company.

Show your support by signing this petition here. View photos of the action as it develops here.
Posted by Teamster Power at 2:52 PM