Port drivers join Teamsters -- and the company is cool with it 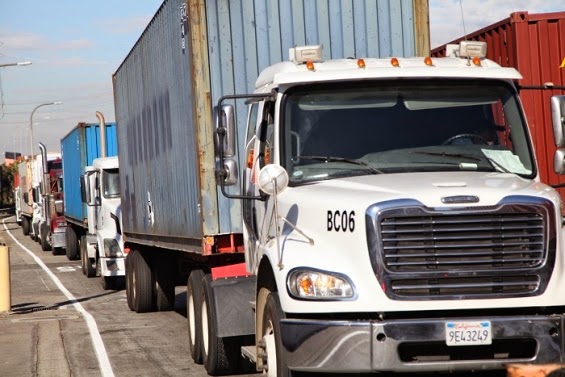 On Friday the misclassified port truck drivers at the Port of Los Angeles/Long Beach scored a major victory. Drivers at Shippers Transport Express voted to be represented by Teamsters Local 848 -- and the company is fine with it.

The drivers had been misclassified as independent contractors until Jan. 1. In November, the company notified them it was changing its business model and hiring drivers as employees after the New Year. Shippers Transport Express agreed to respect the drivers' right to form a union and to remain neutral.

The port trucking industry is likely to follow Shippers Transport Express and hire the drivers who've been misclassified as independent contractors, according to the company's general manager.

Our friends at We Party Patriots wrote a terrific blog post about it. WPP tells us:


...General Manager Kevin Baddeley told the Press-Telegram, “This is the future of the industry, I think.  I think we’re just the first. I’m OK with it. It’s what the drivers want.”

"The future of the industry" -- that's certainly music to our ears! So is this:

Shippers’ transition to an employee-based business model is a crucial step in the drayage industry’s efforts to modernize, make the ports more efficient and reduce congestion at the ports and on our freeways.  On unionization, we took a neutral position because we respect our drivers’ right to form a union. Finally, through our productive dialogue with the Teamsters, we anticipate we will be able to improve operational efficiencies and stabilize our driver workforce.”

There's another reason the port companies are starting to classify their employees properly: to avoid legal liability and labor disruption such as the strikes that have rocked the ports over the past year.

“This has been a long struggle." Acosta said. "As Teamsters – and professional port truck drivers – we look forward to working with management to move port cargo more efficiently and to modernize the industry.”

Fred Potter, Teamsters international vice president, called the agreement 'hisoric.' He said it shows 'that labor and management can work together constructively to find solutions to challenges facing the industry and to the injustices facing the drivers.'