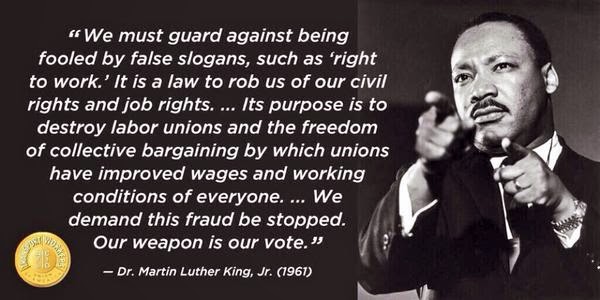 You can bet it isn't Kentucky workers who are passing right-to-work laws in six counties so far this year. The workers are fighting them.

It's an out-of-state lawyer named Brent Yessen who is fronting for billionaires and CEOs who want to ship more jobs out of the country to cut workers' wages. The corporate dating service for state lawmakers known as ALEC is also pushing the local right-to-work laws.

Their strategy is to bypass the Legislature, which is unlikely to pass a statewide right-to-work law. Bill Londrigan, president of the Kentucky AFL-CIO, explains:


“This past election cycle, working Kentuckians rejected corporations’ bad faith attempt to take over the state legislature and poison their policies. Now these same out-of-state corporate interests want to take over our county governments by pushing a radical outside agenda. These illegal ordinances will affect all workers, union and non-union. They will decrease wages, lower median household income, increase poverty, and undermine workplace safety.”

In the fall of 2014, Republican candidates for the state House of Representatives promised to pass a right-to-work law if they gained control of the Legislature. The Democrats held their 54-46 edge in the House.

And so Yessen's out-of-state group, called 'Protect My Paycheck,' are claiming a home-rule ordinance allows the counties to pass right-to-work laws.

Right to work has nothing to do with protecting workers' paychecks. They are an attack on unions and workers' right to collectively bargain. They are devious, controversial and confusing. The name 'right to work' was chosen to make such laws seem like something other than what they really are.

Right-to-work laws actually allow government interference with businesses' right to bargain collectively with its workers. They force unions to represent workers who don't pay fees to support the contract they benefit from.

That's the point of right-to-work laws: To drain union resources and allow outside groups like the Koch brothers (or 'Protect My Paycheck') to meddle in union workplaces.

Unfortunately for the anti-worker 'Protect My Paycheck' group, Kentucky's attorney general says the county right-to-work laws are illegal. Earlier this month, nine unions filed suit against the law in one county. According to Reuters,

The lawsuit only covers Hardin County, but plaintiffs' attorney Irwin Cutler said the suit could expand to cover challenges to laws passed in Warren, Simpson, Fulton and Todd counties.

And according to the Kentucky State AFL-CIO,