How the last lousy trade deal increased the trade deficit with S. Korea 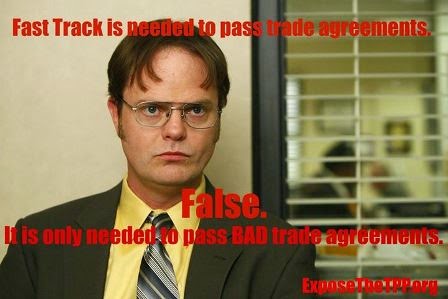 The fact that America's last bad trade deal cost tens of thousands of American jobs won't prevent advocates of the next bad trade deal from trying to ram it through Congress.

The trade deal with South Korea went into effect in March 2012. Advocates promised it would create tens of thousands of American jobs. It didn't. In the first year, the deal increased the U.S. trade deficit with South Korea by $5.9 billion. That cost 40,000 U.S. jobs, mostly in manufacturing.

Now we're hearing similar claims about the Trans-Pacific Partnership (TPP), a corporate power grab very similar to the South Korea trade deal. The administration tells us it will create jobs.

Hardly anyone believes that anymore. , the strategy to pass the TPP is to convince Congress to give itself  'fast track' authority. Call it authority to rubber stamp bad trade deals.

According to U.S. Rep. Alan Grayson, a Florida Democrat, fast track would allow each member of Congress '88 seconds of debate per member'  That means there would be no meaningful debate on this trade deal carved out by the lawyers of 50 or so of the most powerful corporations in the world.

So before Congress decides to grease the skids for the TPP, it's a good idea to remember the damage caused by the Korean trade deal. It has been especially hard on the U.S. auto industry. According to Public Citizen, exports to Korea of U.S.-made Fords, Chryslers and General Motors vehicles increased by fewer than 3,100 vehicles annually in the first two years of the deal.

In each of the two years following the Korea trade deal, more than 184,000 additional Korean-produced Hyundais and Kias were imported and sold in the United States, compared with the two years before the deal.

As Public Citizen points out,


The tiny gains in U.S. exports have been swamped by a surge in auto imports from Korea that the administration promised would not occur.