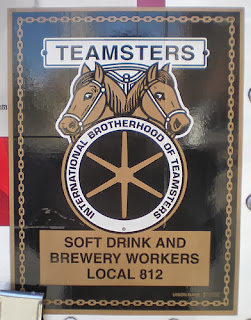 A union gives every member the opportunity to stand up for justice and dignity. Our struggles are about more than contracts – they are about the right of everyone who works hard for a living to have some power on the job, some way of talking back to management without worrying about being fired.

We are a group of workers in the beverage industry — an organization that joins us together to give us a voice in the workplace, strengthens our rights on the job and secures a better life for ourselves and our families. Your dues provide the resources necessary to run this organization.

Dues pay for the costs involved in negotiating contracts, handling grievances and arbitrations, legal representation, educating members and stewards on how to resolve problems.

Dues pay for shop steward training programs, rally and strike expenses and everything else we need to fight for justice.

Dues pay for our website, 812 newsletter "The Voice" and the Local 812 RV. Our RV has saved lives through medical testing, assisted in shop service and organizing campaigns while advertising our union, our mission, our purpose and our goals for the future.

We have worked hard to make our union stronger. We have won industry-standard new contracts to protect benefits, preserve retirement, and ensure that Teamsters Local 812 members have the respect and dignity they deserve. During strikes we preserved health insurance and pension benefits and made sure all strikers could return to work proudly or be placed in other companies with the same or better pay and benefits. Those strikes included Pepsi Meadowbrook (1987), Pepsi Newburgh (1989), Canada Dry (1996) and Coca-Cola (2000).

We are organizing Big Geyser in Long Island, Craft Beer Guild in New Paltz, Oak Beverage Salesmen, Phoenix Merchandisers, not to mention the victories at Snapple Newburgh, Lobo Distributors, Phoenix MTO and others.

Your dues payments make sure we have adequate finances to continue our progress. Together, we can and will improve conditions and build power for Soft Drink and Brewery Workers throughout the New York region and country.
Posted by Teamster Power at 10:12 AM