UPDATES to ADD link that was pvsly broken and new graf 3 with driver reax.

An Iron Mountain manager was recorded telling workers who want to join the Teamsters why they shouldn't. Then the recording was leaked. All over twitter. All over Facebook. All over tumblr. And then in the news media. 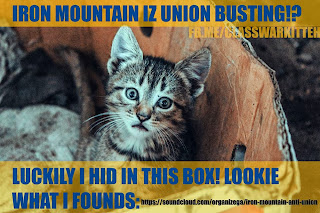 The manager was holding what's known as a captive audience meeting. All the union busters do it. It's legal so long as managers don't intimidate workers.

In this case, the drivers reported it WAS intimidating when their managers forced them into such meetings to lie about the Teamsters. The two managers also emphasized that the company will not bargain in good faith, by stating they will not achieve improvements in a Teamsters contract.


This is a recording of a recent meeting in which two Iron Mountain managers "educate" the employees about the downside of a union. (The link was sent out last night to an email list of labor journalists.) Its content is not especially outrageous—its value lies in the fact that it offers a full look at one of the many little stumbling blocks that go along with any workplace's attempt to organize.

"This is the South. This is not something where unions are [prevalent]," says one manager. "If the union comes in, it will make it much more difficult to get things done." When the other manager addresses the employees, he says of their union campaign, "I can't help but take it personally... it does hurt. It does sting."

At one point, a manager tells the workers, "No one in this room has more union experience than me." At that, one worker speaks up to note that he was in a union for five years at a previous workplace, and tells a story of how the union helped save his job after the company tried to fire him unjustly. "Well shame on the company," replies the manager, "but we don't do that here." (The worker's previous employer would no doubt say the same thing.)

The company tried to respond on the Class War Kitteh Facebook page, but the corporate boilerplate was no match for the kitten in the box.