Austerity: The real winner of the government shutdown 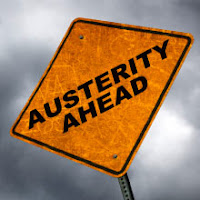 A popular thing to say on Capitol Hill is that there were no winners in the government shutdown and debt ceiling crisis that ended last night.

But once again, savage cuts to social spending have won the day. Sure, the conflict may have been a terrible embarrassment for the GOP, but the Wall Street-backed tea party agenda of austerity came out unscathed.


As the shadow of the shutdown passes, it's proper to be reminded again that this fight involved spending levels that are materially suppressing economic growth and hampering the recovery.

Specifically, the deal soon to be voted on leaves the sequester in place, at least until Jan. 15….The sequester is merely one manifestation of Congress's love for austerity in the post-recession era. From the inception, recovery programs have never been as large or robust as they needed to be, despite evidence that even harsher austerity regimes kept much of Europe mired in slumps.

But the deal that was negotiated yesterday to reopen the government and suspend the debt ceiling didn’t just leave the austerity assault in place. It may end up escalating the assault on workers even more. Richard Eskow at the Campaign for America’s Future writes:


This deal will bend the next few months’ deliberations along the same misguided lines that have guided our political discourse for years now. House and Senate members will be encouraged to come up with a “deficit reduction plan” -- in other words, to impose another round of cuts just like those which have already wounded the economy and shredded millions of jobs.

Specifically, Congress’s latest deal opens the door to further cuts that will target working Americans by establishing a bipartisan committee to deal with budget issues.

But austerity was the winner even before that part of the deal was conceived. That’s because the goalposts in Congress’s spending debates have already been moved to austerity’s side of the field.
Think Progress reports:


It may seem like ancient history, but sequestration was originally designed to be so unpalatable to both parties that the threat of its automatic budget cuts to both defense and non-defense programs alike would be enough to force lawmakers to come to a grand bargain budget agreement. As it first went into effect in March, Republicans tried to pin the blame for any negative consequences on President Obama. But they gradually came out in favor of sequestration’s devastating cuts and have now made it the baseline in the fight over funding the government.

According to the Center for American Progress, Obama’s original budget for 2014 was $1.203 trillion. In 2010, Republicans took control of the House and deficit hawk Paul Ryan proposed a 2014 budget of $1.095 trillion -- that's 10 percent more than what Congress just passed to end the shutdown.

Outrageously, the justification for all these spending reductions is baseless. The country’s supposedly out-of-control debt has been falling significantly over the last two years.

But for tea party extremists, austerity was never about getting the deficit under control. It’s about shrinking government in a way that punishes workers and the poor. Even during the shutdown, what was deemed “essential” and “non-essential” gives you an idea of what parts of government right-wing elites think is important. So Congress’s gym – complete with heated pools and a sauna – was essential. Food assistance to low-income mothers and children? Non-essential.

Now, the latest agreement sets the stage for another budget and debt limit battle just in time for another round of sequester cuts. As we wrote at Teamster.org:


...our government will be funded at a significantly reduced level than it should be... because of sequester cuts that went into effect last year.

For now, we’ve avoided default, reopened the government and hundreds of thousands of locked-out government workers are back to work. That’s definitely a good thing. But now anti-worker zealots in Washington are hoping that sharper austerity measures won't seem so bad compared to the pain caused by the shutdown.

Posted by Teamster Power at 1:39 PM