Locked-out federal workers gathered in front of the Capitol in Washington D.C. this morning to protest Republican extremists in Congress who shut down the government.

Members of the American Federation of Government Employees, the National Treasury Employees Union and other unions spoke for thousands of union workers employed by the government, calling the shutdown what it is: a lockout.

Led by Reps. Keith Ellison (D-Minn.), Raul Grijalva (D-Ariz.) and union leaders, the crowd of workers chanted "Let us work" and "Shut down the shutdown." Sen. Bernie Sanders (I-Vt.) said the jobs of dedicated public servants should not be held hostage by tea party fanatics:


Two weeks ago a shooting took place not too far from here at the Navy Yard. Hundreds of brave federal police officers responded to stop the carnage and restore security. Today those dedicated officers are not being paid. That's outrageous.

Sanders noted the budget that Republican extremists refuse to pass is already a very conservative one. He said there's no reason for them to shut down the government over a budget that is more to the right-wing's liking than anyone else's.

As the crowd grew, furloughed federal employees talked about the uncertainty and hardship their families are facing during the shutdown. An aviation safety inspector said he can't do his job to make sure planes are safe to fly. And a worker from Good Jobs Nation who works at a McDonald's at the Smithsonian described how  the shutdown harms low-wage federal contract workers. 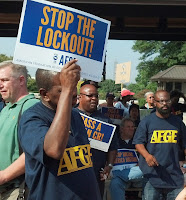 Workers at the rally said they should get back pay for the days they are furloughed. Some members of Congress have proposed legislation to do just that.

The pain from the shutdown is not just being felt by government employees. Speakers railed against right-wing lawmakers who put veterans' families and other vulnerable people at risk, just to score political points and to gut a law they don't like.

As for Republicans' proposal to reopen some parts of the government with piecemeal funding, workers at the rally said they want all of their coworkers to get back to work, not just some of them.

Rep. Ellison said locked out federal workers were prepared to come back and protest every day for as long as extremists in Congress keep holding the government hostage.
Posted by Teamster Power at 1:55 PM