The broad movement to raise wages for American workers will surge ahead next week as Walmart moms plan to strike in more than 20 cities starting as early as tomorrow. 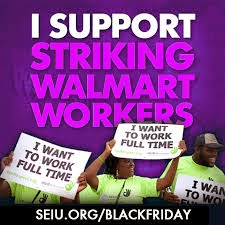 They are walking off the job to protest illegal firings of their co-workers who asked for more hours and better pay.

Workers, unionized and non-unionized, have stood shoulder-to-shoulder during the wave of one-day strikes that are becoming a regular occurrence. Food processing workers, Teamsters, fast food workers, longshoremen, UFCW members, warehouse workers and port truck drivers have all walked the picket line together in the past year.

According to the Organization United for Respect at Walmart (OUR Walmart), Walmart workers will also demand change at Walmart's annual meeting. The strikes are beginning to work, according to OUR Walmart:

Recently, Walmart improved its pregnancy policy after OUR Walmart members, who are also shareholders, submitted a resolution to the company about its pregnancy policy. And, responding to OUR Walmart members’ growing calls on the retailer to improve access to hours, Walmart rolled out a new system nationwide that allows workers to sign up for open shifts in their stores online...

The majority of Walmart workers are paid less than $25,000 a year – forcing many to rely on food stamps and other taxpayer-supported programs to survive. Working women—increasingly the breadwinners and decision makers in households—make up the majority of Walmart’s workforce and are often hit hardest by the employer’s poverty wages.
As the peerless Hamilton Nolan reported at Gawker, Walmart scrimps on its workers but not on its executives:

The problems afflicting crap mecca Walmart extend beyond its persecuted work force, all the way into the corporate executive suite. A new report from an outside overseer says the famously cheap company doesn't mind burning tons of money to benefit top executives.

Institutional Shareholder Services is a firm that examines the corporate practices of companies and then advises big investors on how to vote on various company issues. ISS is far from a radical group. Its focus is simply on making sure companies are well-run. Its recommendations are closely followed by investors representing bazillions of dollars. The Wall Street Journal reports that ISS is now advising its clients that the chairman of Walmart's board needs to tossed out for being too cozy with company executives, and that the company's executive pay needs to be reined in, because it is too easy for Walmart executives to get big paydays regardless of the company's declining performance over the past year-plus...

A new report from Americans for Tax Fairness shows Walmart and the Waltons received an estimated estimated $7.8 billion in tax breaks and subsidies in 2013. If that ticks you off, consider participating in Walmart actions. Just click here.
Posted by Teamster Power at 5:10 PM