Tell the SEC to bring corporate political spending into the sunshine 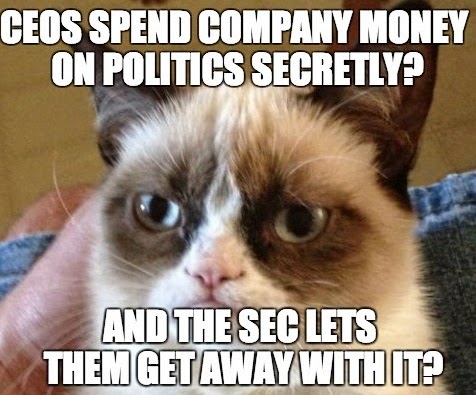 When a CEO takes huge sums of money from a company as compensation, at least the company has to report that to shareholders.

But when a CEO has a political viewpoint he wants to promote with company funds, the company doesn't have to report anything.

Shareholders found out the hard way how that can be a problem. In 2010, Target contributed money to a group running ads for a gubernatorial candidate who opposed gay marriage. The retailer had portrayed itself as a supporter of gay rights, and furious customers boycotted the company. Ad Age reported:

...hundreds of gay-rights supporters demonstrated outside Target stores in locations nationwide, and a petition promising a boycott, signed by more than 240,000, was delivered to Target nearly two weeks ago. A "Boycott Target " page on Facebook had more than 65,000 fans as of Aug. 17. Target 's own Facebook page is littered with disparaging "shame on you" comments from unhappy customers. And a "Boycott Target " flash mob even erupted recently in a West Seattle Target store.

These are the kinds of surprises investors don't like. And if you're expecting to retire with a pension, it's a surprise you shouldn't like either. Because pension funds invest in companies that can spend money on political candidates and causes without telling anyone what they're doing. The Teamsters alone invested more than $100 billion in the capital markets through affiliated pension and benefit funds.

If you invest in the financial markets as an individual -- and you probably do if you have a 401(k) or other kind of retirement account -- you should also be concerned.

You can help tell the SEC that we demand corporate transparency by submitting a comment in support of the petition today. Click on this link and take two minutes to tell the SEC to bring corporate political spending into the sunshine.

Posted by Teamster Power at 3:01 PM