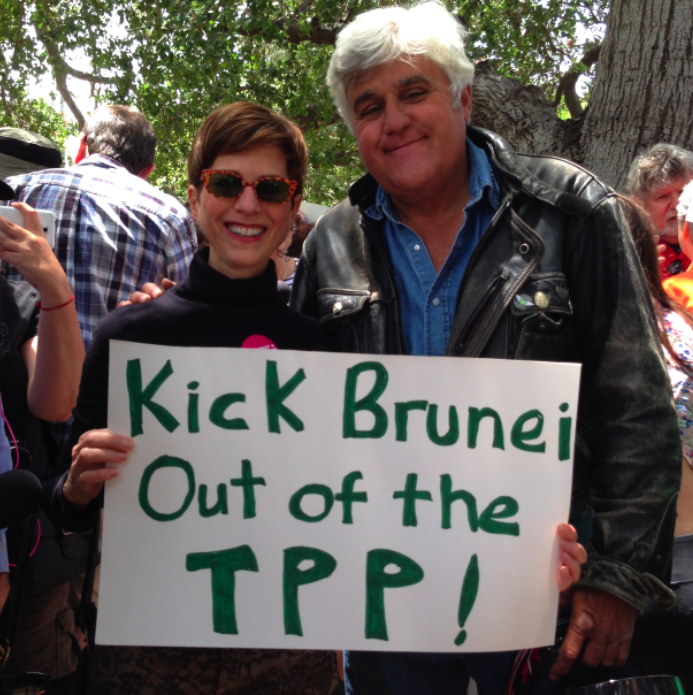 Jay Leno and other celebrities are taking up the fight against the TPP now that the Sultan of Brunei imposed a law requiring stoning for adultery and same-sex acts.

Brunei is one of 12 countries negotiating the Trans-Pacific Partnership. According to Politico Pro:


Jay Leno and other Hollywood celebrities have taken to the streets and the Internet to protest Brunei’s implementation of an extreme version of the Islamic religious code known as Sharia law, with some calling for the tiny Southeast Asian nation’s ouster from a major Asia-Pacific trade deal...

Leno and the Feminist Majority Foundation hit the streets Monday to protest the country’s establishment of the religious legal system (http://bit.ly/1jneB2N), which includes such penalties as death by stoning for adultery and same-sex acts. The group is holding a protest rally outside the Beverly Hills Hotel, one of the properties owned by the Dorchester Collection, a global luxury hotel operator controlled by Brunei’s government...

Actress Frances Fisher, who currently stars on ABC’s Resurrection, made a point of calling for the U.S. to kick Brunei out of the TPP because of the country’s new legal code.  “The TPP is a dangerous pact in its own right,” Fisher said at the rally. “Like NAFTA, it will off-shore millions of good paying American jobs, threaten environmental regulations, like Beverly Hills brand new fracking ban, jeopardize internet freedom and access to low cost generic drugs.”

Props to Politico Pro, by the way. Most of the mainstream media ignores the TPP angle (of course). The Los Angeles Times, for example, published an entire story about the protest without mentioning the TPP.