The real war on Christmas 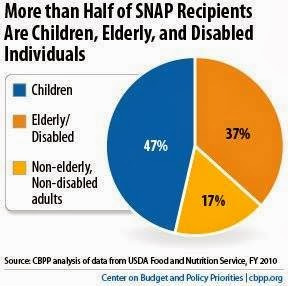 Brother Benjamin Carlson posted this image of the real war on Christmas on the Teamsters Facebook page. And those SNAP benefits (food stamps) cost a taxpayer making $50,000 a year just $36, according to The Progress Report.

Corporate welfare, on the other hand, cost that taxpayer $6,000:

When it comes to funding the rest of America’s social safety net programs, the average American taxpayer making $50,000 a year pays just over six dollars a year.

But the American taxpayer is paying a lot for the billions of dollars the U.S. government gives to corporate America each year. The average American family pays a staggering $6,000 a year in subsidies to big business.

Where does some of that $6,000 every year actually go? For starters, $870 of it goes to direct subsidies and grants for corporations. This includes money for subsidies to Big Oil companies that are polluting our skies and fueling climate change.

An additional $870 goes to corporate tax [loopholes that other taxpayers end up paying for] — or twice as much; Citizens for Tax Justice found that the U.S. Treasury lost $181 billion in corporate tax subsidies, which means the average American family could be out as much as $1,600 per year.

Of that $6,000 for corporations each year, $1,231 of it goes to making up for revenue losses from corporate tax havens. This money goes to recouping losses from giant transnational corporations like Apple and GE that hide their money overseas to boost profits and avoid paying income taxes.