RTW on billionaires' agenda in 3 (at least) states 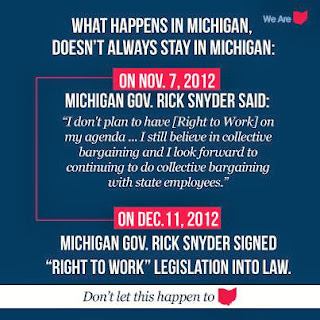 The Benedict Arnold  Koch brothers and their greedy billionaire friends are at it again, trying to sucker the public into thinking busting unions is somehow good for 'freedom' and 'business.'

David Lieb at the Associated Press has the story:


Buoyed by recent successes in the Midwest, conservatives and business groups are targeting at least three additional states for new efforts that could weaken labor unions by ending their ability to collect mandatory bargaining fees.

The latest efforts are focused on Missouri, Ohio and Oregon and - in a new twist - could put the issue before voters in 2014 instead of relying on potentially reluctant governors to enact laws passed by state legislators.

The strategy of appealing to voters could avoid a redo of the massive union-led protests that clogged some Midwestern capitols where Republicans recently enacted other anti-labor proposals...


"There's national money to be had, and there are large donors in the state that definitely want to move forward," said Jill Gibson Odell, a Portland, Ore., attorney who is sponsoring an initiative to restrict union fees for public employees in her state.

(At least Odell is honest about her, um, hustle.)

We've seen over and over billionaires like the Koch brothers buying off politicians so they can lower workers' wages.

We know for a fact that Koch buddy and  Ponzi scheme Amway heir Dick DeVos promised Michigan lawmakers money if they'd vote for right-to-work-for-less. A Michigan lawmaker said so in front of an electronic recording device.

If the Koch brothers cared so much about freedom, they wouldn't have sold oil equipment to Iran.
Posted by Teamster Power at 1:13 PM