Noisy protests and a rash of negative press marred the American Legislative Exchange Council's celebration of its 40th birthday in Washington, D.C., today. As anti-worker lawmakers and their corporate supporters met inside the Grand Hyatt Hotel, some serious anti-ALEC street heat was delivered by postal workers, Teamsters, AFSCME members, enviros and our good friend the Fat Cat.


What? These are elected officials. They are to put the interests of their states and constituents first. Apparently at some level people realized that, because the draft job description was never adopted. But the very suggestion demonstrates ALEC’s eagerness to control these lawmakers.

Dana Milbank at the Washington Post today chastised ALEC for banning reporters from meetings between its corporate members and state lawmakers. An ALEC spokesperson told him ALEC "is completely legislator driven."


Uh-huh. And ALEC is proving that by keeping reporters from the rooms where the legislators are or are not receiving their marching orders from corporate patrons.

The Guardian reported today that ALEC plans an assault on education, health and taxes in the coming year. Through state-based stink tanks aligned with ALEC, the agenda includes: 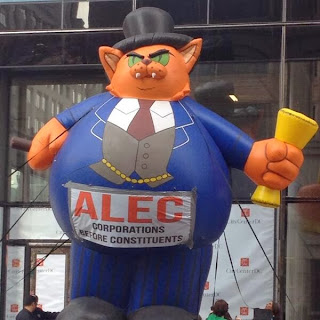 ...proposals from six different states for cuts in public sector pensions, campaigns to reduce the wages of government workers and eliminate income taxes, school voucher schemes to counter public education, opposition to Medicaid, and a campaign against regional efforts to combat greenhouse gas emissions that cause climate change.

The stink tanks have a war chest of $83 million from such civic-minded organizations as the Koch brothers, the tobacco company Philip Morris, food giant Kraft and the multinational drug company GlaxoSmithKline.

The Guardian has also reported ALEC is losing members, facing financial trouble and worried that the IRS will finally catch up to its lie that it doesn't lobby. Another revelation sure to embarrass the supposed free-marketeers at ALEC: It wants to impose a tax on people who put solar panels on their homes.

This just gets better and better.