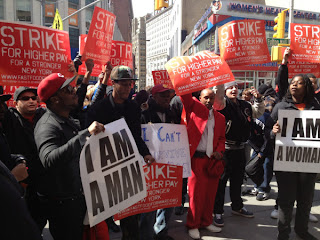 The low-wage strike wave continues this week as fast-food workers and supporters gear up for tomorrow’s national day of strikes and protests. Fast-food workers are demanding living wages and the right to unionize.

Organizers say widespread walkouts targeting fast-food chains will hit up to 100 cities tomorrow. This latest round of strikes follows last week’s Black Friday strikes against Walmart that saw worker protests at up to 1,500 Walmart stores and resulted in over 100 arrests. It also follows the 36-hour strike by port truck drivers who haul Walmart goods at the Port of Los Angeles starting Nov. 18.

Fast-food workers are hoping Thursday’s strikes will be the largest ever, doubling the reach of mass strikes in August that spread to more than 50 cities.


An organized labor movement that began at a single New York McDonald’s about a year ago is planned to spread to around 100 cities this week. Fast-food workers nationwide are redoubling their efforts to earn higher wages with a more aggressive set of one-day strikes that organizers say will hit every region of the U.S.

Over the course of the last year, the fast-food protests, which are being backed by union groups such as the Service Employees International Union, have expanded greatly in scope.

Retail and fast-food corporations are raking in billions of dollar while their workers scrape by on poverty wages. Multibillion dollar fast-food giants like McDonald’s cost taxpayers $7 billion a year in public assistance because they pay their workers so little. Meanwhile, a new study released yesterday exposed a tax loophole that allowed fast food chains to reap an extra $64 million over the last two years, feeding more bloated executive pay.

These corporate welfare queens do more than give crumbs to workers – they directly push their employees onto welfare, give them demeaning tips about how to survive on low pay, and ask low-wage workers to donate to other low-wage workers instead of paying them a living wage.

The rising movement of low-wage workers is growing – and it’s bigger than retail and fast food. Workers in other low-wage industries such as warehouse workers, port truck drivers and government contract workers have been staging protests and strikes, too.

According to the Low Pay Is Not Okay website:


We’ve got their attention, and the fast food giants we work for are going to hear us Thursday. Over the last couple of weeks there has been an amazing – and inspiring – outpouring of support for workers like us who don’t get paid enough to make ends meet.

On Thursday, supporters will be protesting and rallying in solidarity with us across the country!

Mary Coleman, a 59 year-old worker at Popeye’s who relies on food stamps, was quoted in The Nation saying,


I'm tired of working for $7.25. I can't take care of my household; I can't even take care of myself. Everyday struggles are being able to keep food on the table, being able to get the necessities that are needed for everyday living…And then if you need to go to the doctor, you can't afford that either…

I'm very excited about [Thursday’s strikes], and it lets me know people can come together and do what's right.

Teamsters are encouraged to come out tomorrow and stand in solidarity with low-wage workers in the fast-food industry. Click here to find a protest near you!