Take part in the global day of action against the TPP 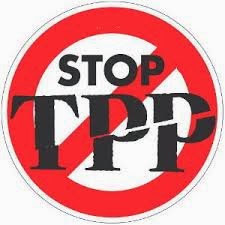 Today, working people all over the world will take action to protest the secret corporate empowerment deal known as the Trans-Pacific Partnership (TPP).

We like to say TPP stands for 'Taking Power from the People.'

Negotiators for the World Trade Organization (WTO) today will begin the latest secret meeting in Bali, Indonesia. More than 90 organizations and social movements in Indonesia are calling for a global day of action to protest toxic trade agreements such as the Trans-Pacific Partnership (TPP).

Flush the TPP has a handy list of dozens of cities (mostly in the United States) where you can express your opposition to this latest attack on workers' rights and consumer protections. Click here to find one near you. Teamsters are encouraged to join the action. An action alert was sent out yesterday saying:


We have already lost 5 million jobs due to NAFTA and other agreements signed since then.

Get out there, folks.

Posted by Teamster Power at 8:51 AM