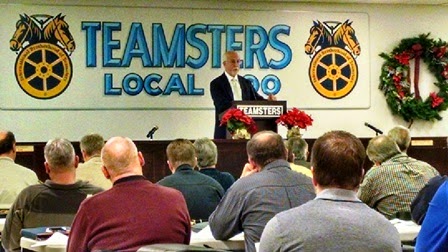 Anti-worker politicians in Wisconsin are spoiling for a fight against working people in 2015, and Wisconsin Teamsters are ready to defend them if necessary.

Earlier this month, Wisconsin State Rep. Chris Kapenga said he planned to introduce a right-to-work bill, though he hasn't set a date.

Above, Teamsters Local 200 in Milwaukee hosted a Milwaukee Building Trades Council workshop for understanding and education union members about right to work in Wisconsin. Brother Tom Millonzi, secretary-treasurer of Local 200, sent us these photos of building trades managers and business representatives who attended with Teamsters from Local 200, 344, 662 and 695.

It does what CEOs and billionaires want it to do: push wages down, ship jobs overseas and take away freedoms at work in order to make even more obscene profit and exercise even more power over workers' lives.

Wisconsin is fortunate to have a number of enlightened businesses that oppose right to work. The Associated Press reported yesterday that a coalition of business has formed to fight right to work:

A newly formed coalition of more than 300 construction-related private businesses in Wisconsin announced Wednesday that it will work to defeat a right-to-work proposal being discussed by Republican leaders in the Legislature.

Formation of the group comes as talks proceed behind the scenes among Republicans who control the Legislature about the timing of a right-to-work bill and what form it may take.

Gov. Scott Walker repeated his message Wednesday, during a brief speech to Republican state senators in the Capitol, that he sees right-to-work as a distraction from his agenda. He told lawmakers he wants them focused on his legislative agenda, but he also didn't promise to veto a right-to-work bill should it pass.

Wisconsin, sadly, isn't the only state where politicians are attacking workers' wages, their safety and their rights at work. In Kentucky, illegal local right-to-work laws are advancing through three counties and more are expected. In Missouri, a state lawmaker announced his intention to file a right-to-work bill in the next session. 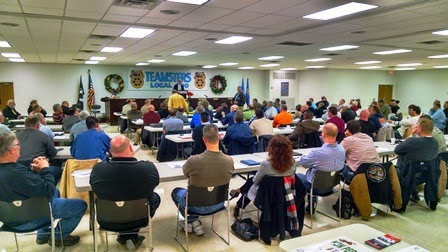 Posted by Teamster Power at 2:54 PM