CEOs who loot their companies are actually capable of being ashamed that they make hundreds of times the average salary of their workers. That's why the Teamsters want the Securities and Exchange Commission to do what Congress told it to do. The SEC is supposed to issue a rule requiring companies to disclose the gap between the pay of their CEOs and their average worker. The SEC hasn't done it yet. 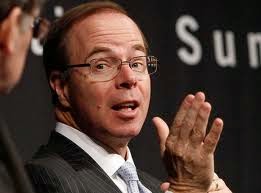 And CEOs are continuing to plunder their companies and consign their workers to poverty wages.

Take McKesson CEO John Hammergren, for example. He took home $51.7 million last year and his pension is worth an estimated $114 million. Hammergren isn't anxious to talk about his warehouse workers in Lakeland, Fla., who make so little money they can't afford health care. (They voted to become Teamsters, but McKesson doesn't want to bargain.) When Glenn Gray, a Teamster, spoke out publicly about his meager wages, McKesson fired him. (Fortunately, the NLRB ordered McKesson to give Brother Gray his job back.)

Sen. Robert Mendendez, a New Jersey Democrat, is pressuring the SEC to obey the law Congress passed four years ago. He's had help from Public Citizen and the Teamsters, who helped him gather signatures for a letter to the SEC.


Public Citizen lauds the effort of 15 U.S. senators led by Sen. Robert Menendez (D-N.J.) to promote the implementation of a four-year-old law that requires publicly traded companies to disclose the ratio of CEO pay to that of the median-paid employee at the firm.

In a letter to the U.S. Securities and Exchange Commission (SEC), which must implement the law, the senators ask for immediate attention to this provision of the 2010 Dodd-Frank Wall Street Reform and Consumer Protection Act.

“This is the simplest of the 400 rules mandated by the Wall Street reform law,” said Bartlett Naylor, financial policy advocate for Public Citizen’s Congress Watch division.

“The rule is prepared and has the public support of two of the five SEC commissioners. SEC Chair Mary Jo White need only schedule a vote.”

“This rule will help investors better understand if CEOs and average workers receive appropriate compensation,” added Naylor. “That’s important in a day when too many CEOs siphon off extraordinary investor wealth while leaving the employees who generate the revenue from products and services underpaid. This is an unsustainable recipe both for the economy and for individual firms.”

Posted by Teamster Power at 5:07 PM