The TPP would not improve the US economy, says the US government 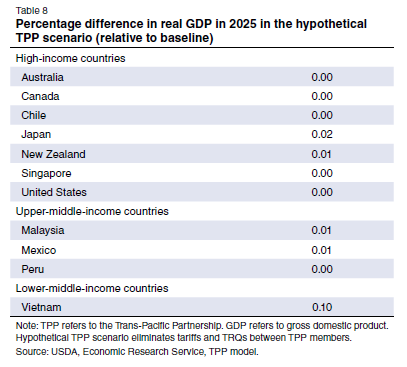 The TPP wouldn't increase U.S. economic output one little bit -- even if it removed all tariffs -- according to none other than the U.S. government.

That shouldn't come as a surprise. The TPP, or Trans-Pacific Partnership, is little more than a corporate power grab that will lower wages, send jobs overseas, jack up the cost of medicines and make it easier for foreign companies to attack our laws. The Teamsters are fighting hard against this corporate giveaway.

Now the U.S. government's own agriculture department tells us the TPP holds no promise of economic growth for the United States -- and none or close to none for the other 10 countries negotiating the deal.

As our friends at Public Citizen's Global Trade Watch pointed out,


USDA calculates that even under the unlikely scenario of wholesale tariff elimination, the TPP would result in a GDP gain of 0.00 percent for Australia, Canada, Chile, Peru, Singapore, and the United States.  For Japan, New Zealand, Malaysia, and Mexico, the projected gain amounts to a rounding error – 0.01 or 0.02 percentage points.  Vietnam is projected to get the biggest GDP boost at a mere one tenth of one percent.

The U.S. news media ignored the report, but an Australian group called the Australian Fair Trade and Investment Network caught it. (Australia is one of the xx countries negotiating the TPP.

Patricia Ranald, who coordinates the group, issued a statement:


The U.S. Department of Agriculture has released a report that shows Australia can expect zero economic growth from the TPP, even if all tariffs and other barriers to imports are removed. Since we know this most favourable outcome is unlikely, the report begs the question of why the government is continuing with negotiations which will be of no overall economic benefit to Australia.

The government, she wrote, 'should walk away from such a deal.'