Ruh-roh: Right-to-work on the agenda in Missouri, Wisconsin 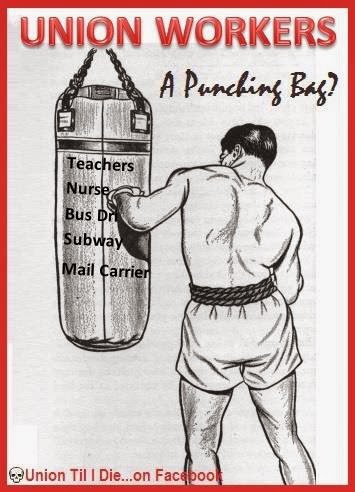 Unions will have at least two big fights on their hands as awmakers in Missouri and Wisconsin said this week they will file right-to-work bills next year.

Here's what we know about Missouri: State Rep. Bill Lant, who has filed several bills attacking workers, announced he intends to file a right-to-work bill in the next session.

Southwest Missouri Republican Representative Bill Lant says he will attempt to bring right-to-work legislation to the House floor in the 2015 legislative session...

Lant admits some people will see a decrease in their paycheck...

Our brothers and sisters in Missouri ask Missourians to show Lant they do not want the right to work for LESS. You can send him an email here: Bill.Lant@house.mo.gov or call: 573-751-9801.

We learned most recently about Wisconsin. The Associated Press reported:


A Republican lawmaker promised Tuesday to introduce a right-to-work bill, prompting warnings from a Democratic leader that the state could see a round of protests reminiscent of the massive demonstrations against Gov. Scott Walker's law stripping public workers of their union rights.

Rep. Chris Kapenga of Delafield, one of the most conservative members of the Assembly GOP caucus, said he's convinced right-to-work legislation is right for the state. He said he believes giving people the choice of whether to join a union will boost incomes and the state's economy...

The new two-year legislative session begins in January. Kapenga wasn't sure when he would bring the bill forward, saying he needs to talk to the Assembly Republican caucus and make the case for the measure. He said Speaker Robin Vos, R-Burlington, supports the concept.

Our friends at the Center for Media and Democracy tell us the bill will get help from -- you guessed it -- groups backed by the Koch brothers.

On December 1, a new 501(c)(4) "social welfare" organization calling itself "Wisconsin Right to Work," popped up in Wisconsin promising to "aggressively promote sound public policies and individual freedoms from a grassroots citizen engagement organization." The language is familiar to those who read press releases cranked out by David Koch's Americans for Prosperity (AFP) group, so it is no surprise that new group is led by Lorri Pickens, who has worked for the Koch brothers for years, most recently as AFP's Director of State Operations in Washington, D.C. Pickens was previously associate state director for AFP's Wisconsin chapter from 2005 until 2009. The group is organized as a 501 (c) 4 "social welfare" organization designed to disguise its funders. The group's website was registered by Kurt Luidhart of the Indiana-based "Prosper Group," a GOP digital media firm that Walker's campaign hired in 2014 to run their online fundraising. Luidhart attended Walker's election night party, and has previously done contract work with AFP.

The Kochs and AFP have spent over millions in recent years in support of Wisconsin's GOP leadership. AFP was very active in providing astroturf or phony grassroots support for right to work when the state of Michigan took it up, verbatim from the ALEC bill, in 2012.

Although AFP says it is not behind the Wisconsin push, the legislation has long been a priority for the Kochs, whose funding network bankrolls AFP as well as ALEC and the American City and County Exchange (ACCE) the new ALEC-style entity for city and county level politicians.

ALEC and ACCE are meeting in Washington this week for the annual "State and Nation" policy summit. CMD recently reported that the top of the agenda items at this week's meeting is state preemption of local ordinances to raise the wage and a new proposal fresh off the drawing board at the Koch-funded Heritage Foundation for local right to work laws.

Posted by Teamster Power at 3:05 PM