Walmart workers appear to have met their goal of protests at 1,600 stores with help from Teamsters and other groups across the United States.

The Walmart workers' organization, OUR Walmart, reports 'the biggest, boldest and most exciting Black Friday ever!' Hundreds of Walmart workers went on strike and in Washington, D.C. and Southern California they held the first ever sit-down strikes in Walmart’s history. Their website, Blackfridayprotests.org, had a half-million visits, #WalmartStrikers trended on Twitter and received plenty of local and national news coverage.


...marched through the Walmart parking lot in Scarborough and took their protest right outside Walmart's front doors. The group passed out flyers informing employees they had a right to form a union.

The rally was short lived because the police asked them to move their protest to the far side of the parking lot or be arrested for trespassing. Protesters complied, but said they won't stop fighting until Walmart starts paying a living wage, which economists say is $15 an hour. Employees are paid a little more than $8 an hour. 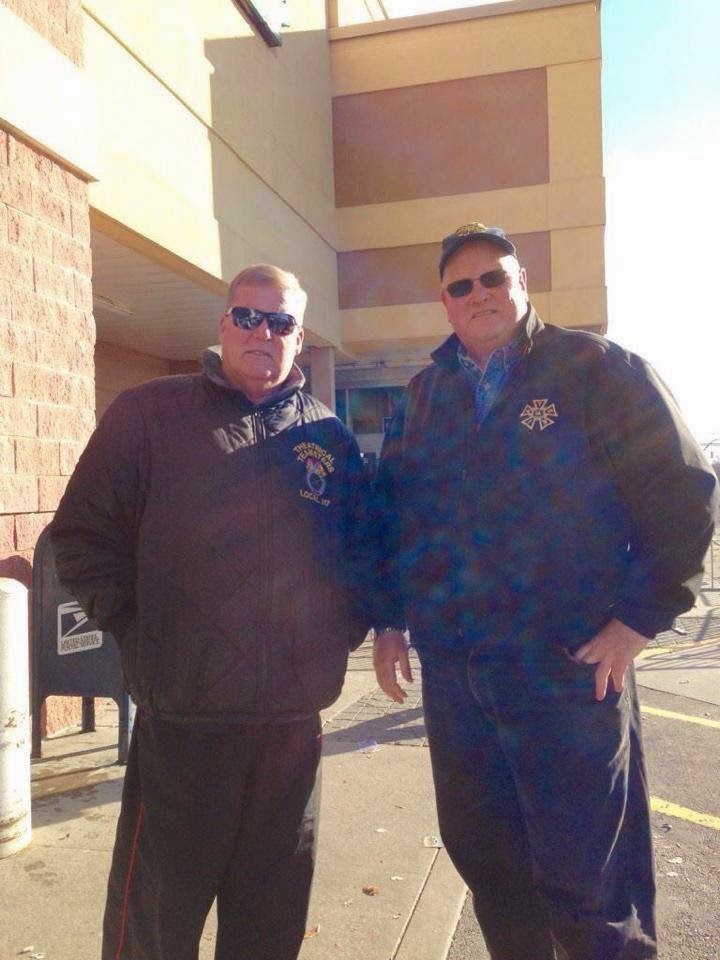 Instead of shopping for deals, 500 people descended on Wal-Mart and McDonald’s in St. Paul’s Midway shopping district on Black Friday to demand higher wages and sick leave for all employees.

Closely guarded by police on foot, bikes and in squad cars, protest leaders yelled into bullhorns “What do we want? Justice! When do we want it? Now!”

Participants waved large signs that said, “I stand with Wal-Mart strikers,” and “Pay your associates a living wage.” 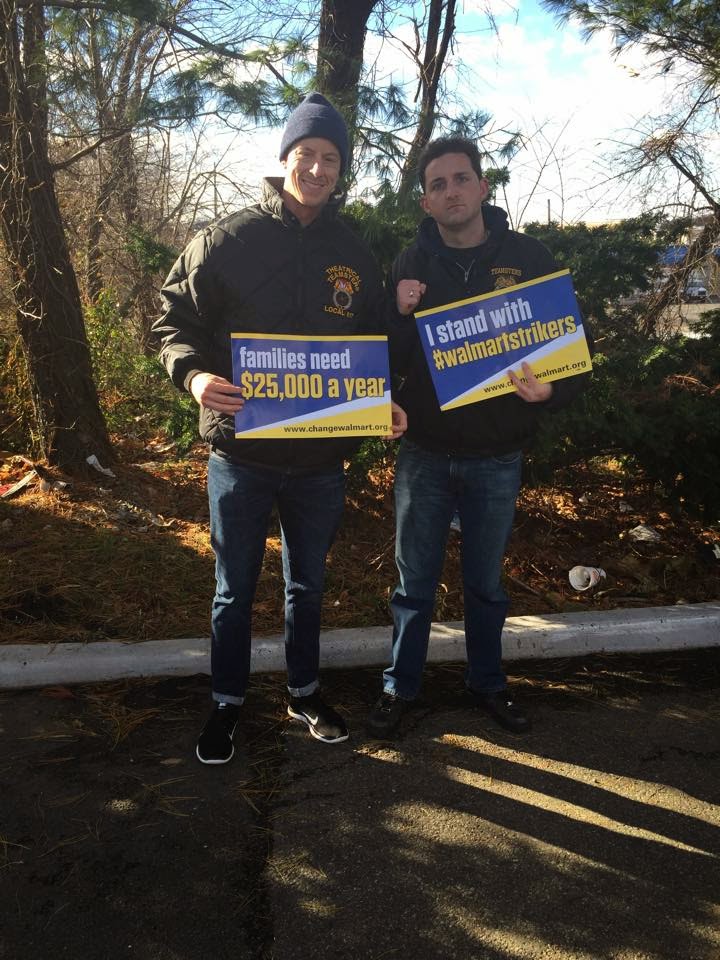 Brother Tony Vaccaro sent us the photo below and told us:


Black Friday Protest at Walmart in Amherst (Buffalo) New York. The rally was organized by the Buffalo Coalition of Economic Justice who delivered a petition to the store manager following the rally.

Dozens of union leaders and community activists braved the mid 20's temperatures to send a message to the Corporate giant while local television  and radio stations were present. 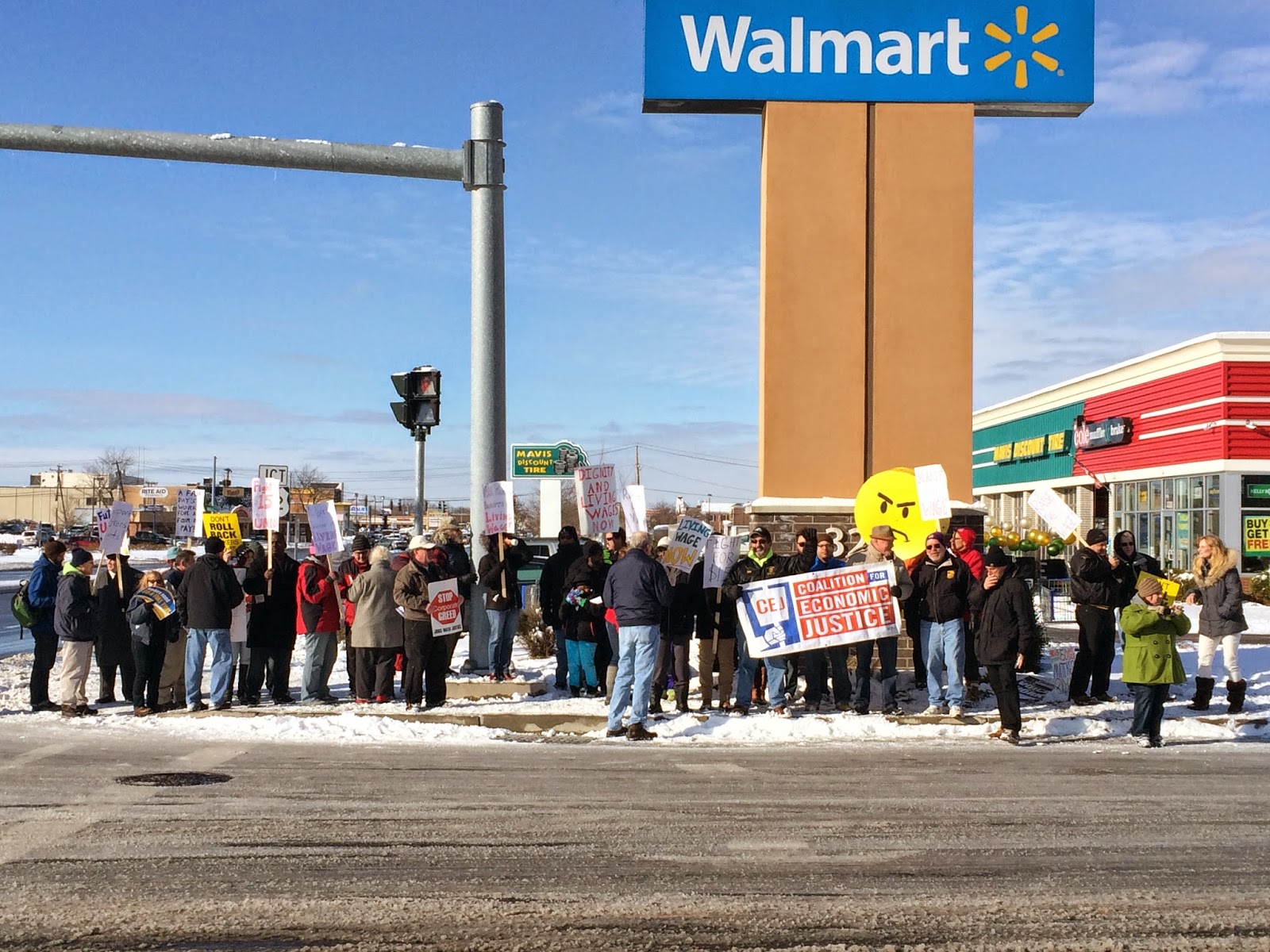 Dirk Rasmussen of Teamsters Local 639 protested outside of a Walmart in Washington, D.C. Dave Jamiesen interviewed him for The Huffington Post:


Dirk Rasmussen had Friday off and could have slept in if he wanted to. Instead, the Maryland resident and Teamster rose early and drove to downtown Washington, eager to join a post-Thanksgiving protest against Walmart.

"Our local [union] president encouraged us to take part," said Rasmussen, 58, who works in a lumber and building-supply warehouse. "I raised eight children on a Teamsters benefit package and Teamsters wage. I'm a firm believer in collective bargaining, and I'm very concerned about the security of this next generation."

Black Friday may be most famous for doorbuster shopping deals, but among progressives it's becoming a regular holiday for labor demonstrations. Friday marked the third consecutive year of scattered but highly visible protests against Walmart. Demonstrators, along with an unknown number of Walmart strikers, are calling for better pay and scheduling practices from the world's largest retailer.