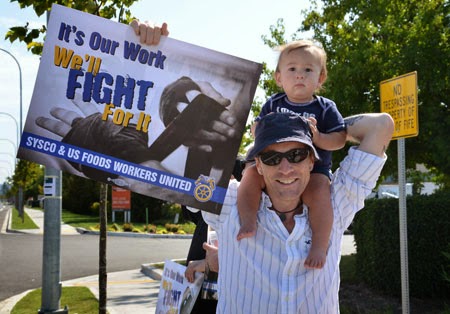 The proposed Sysco-US Foods merger will probably hurt workers and consumers if it is allowed to go through, a new report by the Teamsters concludes.

The International Brotherhood of Teamsters warned the $8.2 billion merger would result in a virtual monopoly in many markets, costing workers' jobs and raising food prices. According to The Street:


The Teamsters found that the merged company would hold 60% in metro Chicago, 70% in Los Angeles and Southern California, more than 70% in metro Philadelphia, 75% in the midwestern region around Denver and 80% in Minneapolis-St. Paul.


Even with divestitures of physical assets, he said, a smaller competitor could not easily become a check on a combined Sysco and US Foods.

“Nobody has bought a facility, loaded it with product and taken significant share overnight,” he said.

Teamsters have plenty of experience with what Wall Street likes to call 'rationalizing the supply chain': merging smaller distributors into one behemoth. To pay the exorbitant costs for the merger, companies borrow money. To be able to pay back the debt, they shut down some operations, fire workers and stop investing in new plant and equipment. Oh, and raise prices.

That's exactly what will happen if Sysco and US Foods merge.

The two companies say they will only have a combined market share of 25 percent, but the Teamsters dispute that. Again, from GCRI:


...critics of the tie-up such as the American Antitrust Institute and Food & Water Watch put it at 55 per cent. Alan Meyers, a mergers specialist in the Teamsters’ capital strategies department, said the union had performed an extensive field study to produce its own estimate.

The union claims 11,500 Sysco and US Foods warehouse workers and truck drivers, who helped the Teamsters survey the number of employees at and the amount of available floor space in those facilities, which determines how much product can be moved through for distribution. Meyers said 70 per cent is an unweighted average of the markets the union has been able to verify, accounting for all types of customers for which Sysco and US Foods currently compete.

You can keep up with what's going on at Sysco and USFoods on the Protecting Sysco & US Foods Workers Facebook page.
Posted by Teamster Power at 2:40 PM