Student debt weaves itself into the fabric of America

College enrollment increased by over 5 million people from 2001 to 2011. And people aren't just going to college at higher rates, they're graduating more frequently too. But, while more people are going to college, the costs are going up as well. It's a good investment: A study by Georgetown University estimates that by 2018, 60 percent of American jobs will require a degree.

However, like lots of good investments, the up-front costs are massive. The Class of 2014, many of whom matriculated merely months ago, are staring down an average of over $30,000 in debt. The Wall Street Journal explains:


The average Class of 2014 graduate with student-loan debt has to pay back some $33,000, according to an analysis of government data by Mark Kantrowitz, publisher at Edvisors, a group of web sites about planning and paying for college. Even after adjusting for inflation that’s nearly double the amount borrowers had to pay back 20 years ago.

Worse yet, these students are walking into a work force at a time when wages are falling. Again from the Journal:


The problem is that earnings and debt aren’t moving in the same direction. From 2005 to 2012, average student loan debt has jumped 35 percent, adjusting for inflation, while the median salary has actually dropped by 2.2 percent. If that continues debt burdens will become more unwieldy. 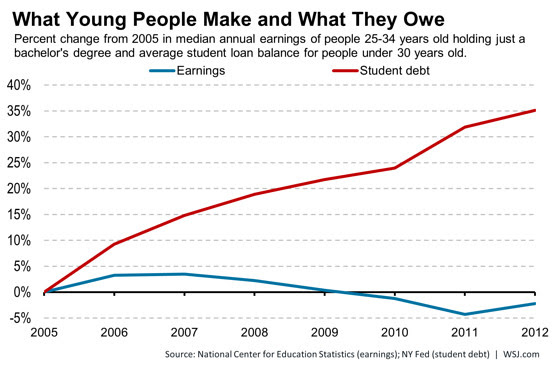 This has turned into a full-blown crisis. There is over $1 trillion in student debt nationally. Without money to spend, especially by individuals that need to spend it, the economy will not grow. Debt will gain interest and the vicious cycle will continue.

I'll end on a personal note. Walking across the stage to get my high school diploma and my college degree were two of the proudest days of my life. I am so proud to work for a union which understands the importance of education and value's extending that moral to its membership. I hope these values will begin to pervade our nation further and we can end this senseless cycle of student debt.
--Teamster Dan
Posted by Teamster Power at 1:07 PM