Ex-governor's petty corruption pales next to the legal scam -- privatizaton 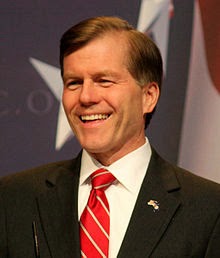 The former governor of Virginia is now on trial for petty corruption after getting away with the much larger con of privatizing government services.

Former Gov. Bob McDonnell is accused of accepting $165,000 in loans and gifts in exchange for promoting the Star Scientific company's snake oil -- unapproved drugs marketed as nutritional supplements despite warnings from the FDA.

McDonnell would have been fine if he just stuck with the plutocrats who wanted to loot the state -- the defense contractor that screwed up Virginia's computer system or the disreputable on-line education company. His problem was that he grifted a Rolex watch and a ride in a Lear jet off of a small-time amateur, and he got caught.

Now during a bizarre trial, the McDonnells claim Williams wasn't buying favors and access. They say the gifts were all about the crush that Maureen had on Williams. Unfortunately for the defense, that was news to Williams. According to the Washington Post,


Williams spoke of how his friendship with the McDonnells was just a transaction to benefit his company, Star Scientific. "I don't believe I would have been close friends with the governor and his family," he explained, "if not for all the money." The governor and his wife wanted even more, he said, but "I turned down a lot of requests." In return for the cash, he said, he was able to launch his product at the governor's mansion, was introduced to health care leaders for his business and had his product placed in gift bags at a National Governors Association meeting.

The pay-to-play scam of which the McDonnells are accused is not all that different from the massive privatization scandals that haven't been prosecuted. That's because they're legal, but that doesn't make them right.

McDonnell sold off government services to a defense contractor in exchange for a $75,000 campaign contribution. He peddled a phony nutritional supplement in the Governor's Mansion in exchange for a Rolex watch. Is there much difference? You could argue McDonnell didn't get anything personally from the defense contractor, but that's not how politics works in America. Political observers wonder why McDonnell didn't just serve out his four years and then get a lucrative lobbying job from the corporations he helped plunder the state treasury.

McDonnell received $75,000 in campaign contributions from Northrop Grumman. As governor, he extended a contract to outsource the state's computer operations to the corporation. The privatized computer system broke down on Aug. 9, 2010 and then for a week starting on Aug. 25, leaving 45,000 undoubtedly furious Virginians unable to get drivers' licenses.

McDonnell was also in on the 'make-education-a-business scam.' According to Resist the Privatization of America,

It passed in the Virginia legislature, and K12 Inc. swung into action in Carroll County, one of the state’s most impoverished counties, to maximize the public money it would receive. Even when the school board voted to close K12 Inc. down because it did worse than traditional schools on 20 out of 22 measures, Virginia legislators with ALEC connections enacted a law in 2012 requiring high school students to take an online course to graduate.

McDonnell should have known the plutocrats know how to do it without getting caught. It's the small amateurs who get you in trouble.

Posted by Teamster Power at 3:53 PM