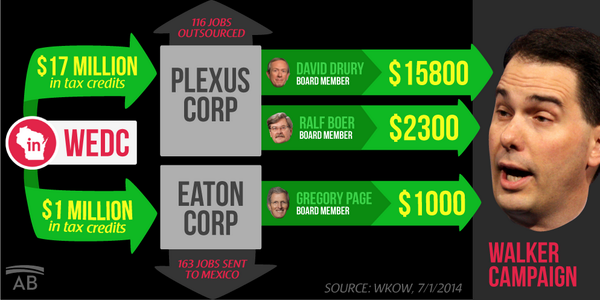 Wisconsin job-killer Gov. Scott Walker created a new economic development agency that took taxpayer money and gave it to companies to send jobs out of Wisconsin.

Greg Neumann at WKOW reported recently that two companies received millions of dollars from the Wisconsin Economic Development Corporation to create jobs, then laid off Wisconsin workers and sent the work overseas.

At least two companies that received financial awards from the Wisconsin Economic Development Corporation (WEDC) later outsourced jobs to foreign countries, with one of those companies receiving a second WEDC award after the fact.

A 27 News investigation has uncovered that both the Eaton Corporation and Plexus Corporation received millions of dollars in financial awards from WEDC, only to later lay off workers whose jobs were taken by employees at the companies' foreign facilities.

In 2011, WEDC awarded Eaton Corp. with up to $1 million in tax credits if the company met job creation and retention goals at its manufacturing facility in Menomonee Falls.  WEDC officials say the company has received $190,000 in tax credits so far.

This is even more incredible: After Eaton moved 163 jobs from a Pewaukee plant to Mexico, the WEDC gave the company another $1.36 million in tax credits for the same Pewaukee plant!<

Another company, Plexus, accepted $4.7 million in tax credits and then laid off 116 workers after sending their jobs overseas.

The editors at the Racine Journal-Times were aghast. In an editorial, they wrote,

This is astonishing, but not nearly as astonishing as what Maley, the WEDC spokesperson, said to Neumann of WKOW.com: “If a company makes a business decision to move some of its jobs out of the state — despite our best efforts — we will continue to work with that company to ensure that as many jobs as possible remain in Wisconsin.”

What’s that saying about fool me once, shame on you? Just how far backwards is the WEDC willing to bend for Eaton or for Plexus?

Not surprisingly, according to WKOW,


Members of the board of directors for two companies that outsourced Wisconsin jobs after accepting financial incentives from the Wisconsin Economic Development Corporation have donated close to $20,000 to Gov. Scott Walker's campaigns since 2005.

Posted by Teamster Power at 2:49 PM