The corporate dating service for lawmakers known as ALEC has a new director who is likely to follow her predecessors' big government, anti-taxpayer agenda. 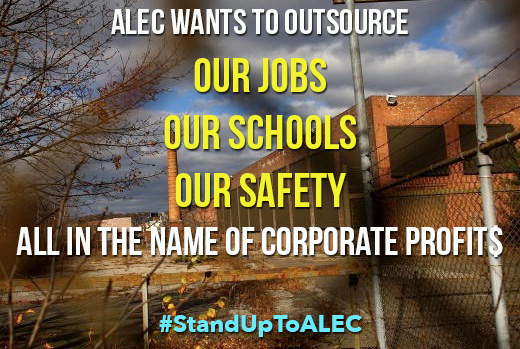 You wouldn't know it from ALEC's propaganda, but the group is a coalition of corporations trying to control the government for their own purposes.

Some of the most hated corporations in America have belonged to ALEC, including McDonald's, Walmart and J.C. Penney, as well as private prison giants GEO Group and Corrections Corporation of America.

Their main reason for joining ALEC is to make money off the state. They do it by bribing state lawmakers with lavish secret vacations and political cash.

ALEC is especially fond of big government when it forces taxpayers to pay more for corporations to provide privatized services. Washington state residents now pay more for liquor than any other state in the country after it privatized its liquor services two years ago. Study after study shows that privatization costs taxpayers more money simply because corporations have to make a profit and government doesn't.

Here are just a few of the services ALEC has tried to bribe lawmakers to privatize:


Privatization is not only expensive for taxpayers, it is profoundly undemocratic. Citizens can vote elected officials out of office if government does a lousy job picking up the trash or educating children. But they have no recourse when a government service is put under contract for decades. Chicagoans found that out to their regret after the city did a deal to let a Morgan Stanley consortium collect parking fees for 75 years. Too late they learned the city overpaid the bankers by $974 million.

Privatization is just one of the many ways ALEC tries to impose the heavy hand of the corporate-backed government on local communities. ALEC succeeded in taking away local school districts' freedom to decide what to teach children. At least four states -- Tennessee, Louisiana, Texas and South Dakota -- now force local school districts to teach that air pollution isn't harmful.

Citizens suffer in states that have blindly followed ALEC's agenda of cutting corporate taxes, raising taxes on the poor and middle class and slashing public services. The two most glaring examples are Wisconsin and Kansas. Both are badly lagging the country and their regions in creating new jobs.

So next time someone tries to tell you ALEC is for small government, just respond with a big 'BWAH-HAH-HAH.'