Corporate pay to play -- on the Supreme Court 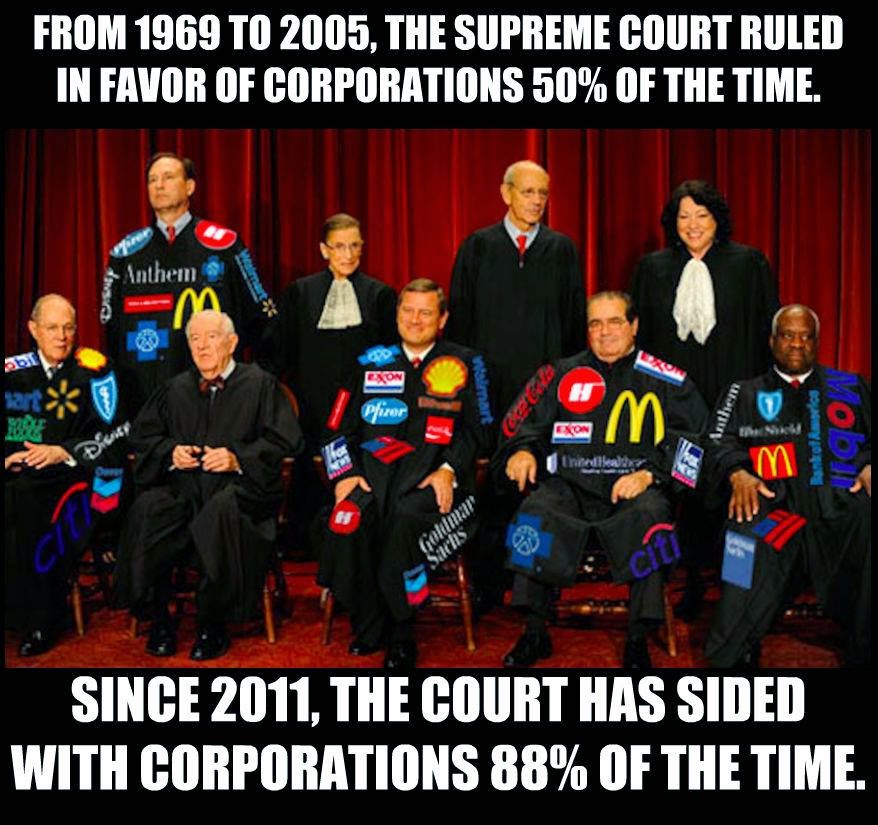 Coincidence? We think not.

If you think corruption is foreign to Supreme Court justices, just remember those distinguished black robes cover men and women who are not just lawyers and not just politicians, but lawyers and politicians.

Clarence Thomas and Antonin Scalia have both lent their names to Koch brother fund-raisers, despite the Judicial Code of Conduct that says federal judges may not...


...personally participate in fund-raising activities, solicit funds for any organization, or use or permit the use of the prestige of judicial office for that purpose.

But lending their names to the fund-raisers got them vacations at expensive resorts where the Kochs advanced their anti-worker agenda, according to the Center for Media and Democracy. In addition,


Justice Thomas has also accepted gifts of travel on the private jets of billionaire Harlan Crow, and he has not been fully forthcoming about the income and political activities of his wife, Ginny Thomas, who launched a group, Liberty Central, to take advantage of the Supreme Court's controversial ruling in the case that struck down election rules, "Citizens United," before the decision in the case was even issued publicly in 2010. And Justice Samuel Alito... has headlined fundraising events for right-wing organizations, such as the American Spectator magazine.

Thomas, arguably the most compromised of the justices, took an expensive four-day vacation paid for by the Federalist Society for Law and Public Policy Studies. Never heard of it? Funded by the Koch brothers, it is responsible in part for the increasingly anti-worker decisions of federal judges.

The Planet POV blog describes the Federalist Society as an elite conspiracy to undermine judges' neutrality. It's an organization of lawyers, law students, judges, professors and anyone else who is willing to claim some sort of intellectual credentials. The organization was founded in 1982 to promote the interest of big business under the guise of 'conservatism.'

The entrenched plutocrats who support the Federalist Society endow professorships, fund conferences and pay for training institutes to explain to judges how to check off their wish list, which includes corporate deregulation, voter suppression and elimination of campaign finance laws. The Federalist Society's influence is insidious, as it has been a channel for young lawyers to get Supreme Court clerkships and prestigious legal jobs since the Reagan administration.

Here's one final indication of the ethical lapses of the corporate wing of the Supreme Court: In 2004, Scalia went duck hunting with Vice President Dick Cheney, but insisted on hearing a challenge to Cheney's energy task force. Imagine if Elana Kagan had taken a vacation with Michelle Obama -- you'd be hearing about that more than Benghazi.
Posted by Teamster Power at 4:45 PM