Hundreds of Europeans were arrested last week in a protest against TAFTA, the latest power grab for corporations and the 1% masquerading as a trade deal between the U.S. and Europe. 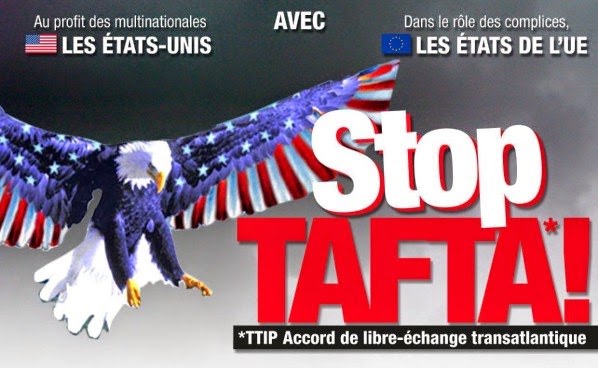 The European news media actually reported on the protest, the arrest and the aftermath of  TAFTA,  also known as TTIP. (We think TAFTA, which stands for Trans-Atlantic Free Trade Agreement, is a more accurate term.)

We have little hope that the U.S. mainstream media would ever deign to cover TAFTA, protests against TAFTA or concerns about TAFTA. That's because ABC, Fox News, NBC and CNN have all hired lobbyists to lobby for trade deals.  They know the best way to get trade deals passed is to keep Americans in the dark about them.

Here's how the European media covers the TAFTA protests. From EurActive.com:


NGOs and trade unions today (19 May) hit back at accusations they were spreading lies on social media about the Transatlantic Trade and Investment Partnership (TTIP), as it emerged that Brussels Police used controversial “kettling” techniques and water cannon on protestors outside the European Business Summit.

Hundreds of anti-TTIP protestors, including a Green member of the Belgian Parliament, were encircled for several hours by riot gear-clad cops before being arrested en masse outside the Egmont Palace in Brussels, using a legal mechanism known as “administrative arrest”.

Administrative arrest allows groups of people to be held without charge for up to 12 hours.
Shortly after an estimated 250 demonstrators were arrested on Thursday, EU Trade Commissioner Karel De Gucht and US Ambassador to the EU Anthony Gardner accused some protestors of spreading lies during a summit panel about TTIP, a trade deal between the EU and US. One example cited was that TTIP would mean Europeans being sold US chickens washed in chlorine.

Here's something else you won't find out from U.S. mainstream media:


This week, EU and US negotiators are meeting in Washington DC for the fifth round of negotiations. They are aiming to agree on a deal by the end of next year.

Just try it: Do a google news search of TTIP or TAFTA. You'll see what news organizations are covering it.

And read the whole EurActive.com story here.
Posted by Teamster Power at 2:39 PM